English-U.S.
Can anyone confirm that "Órale, ese" is Mexican-American slang for "What's up, homeboy"? Or, if that is not right, what does the phrase mean? I've tried looking on the separate threads for Órale and ese, but I can't make sense of the translations that Google Translate gives me. Thanks!

Spnaish-Mexico
if you could give us more context, we would able to help you. Those words has several meanings
D

English-U.S.
Here is the context: In my mystery novel, set in Los Angeles, California, two of my characters are a 30-year-old male investigator, Nicholas, and his 18-year-old Latino (Mexico-born) "wheel man" Miguel (Miguel does the tailing of suspects and other duties). I want to occasionally have Miguel use Mexican slang or speak in Spanish (unfortunately, I myself don't speak Spanish). In the following, they have tailed a suspect to an apartment building, and Miguel spots (sees) a 15-year-old he knows. Nicholas tells Miguel to ask the kid some questions about the suspect. So Miguel goes over to the kid. Originally I had their conversation start like this:

I had found on the web that "Oye, ese! Que hay de nuevo?" means "Hey, homeboy, what's up?" But then someone told me that since Miguel knows the kid, Miguel would say "Órale, ese!" If I correctly understood the person who told me this, "Órale, ese!" already means "What's up, homeboy," which would make the "Que hay de nuevo" redundant. But maybe I misunderstood the person. 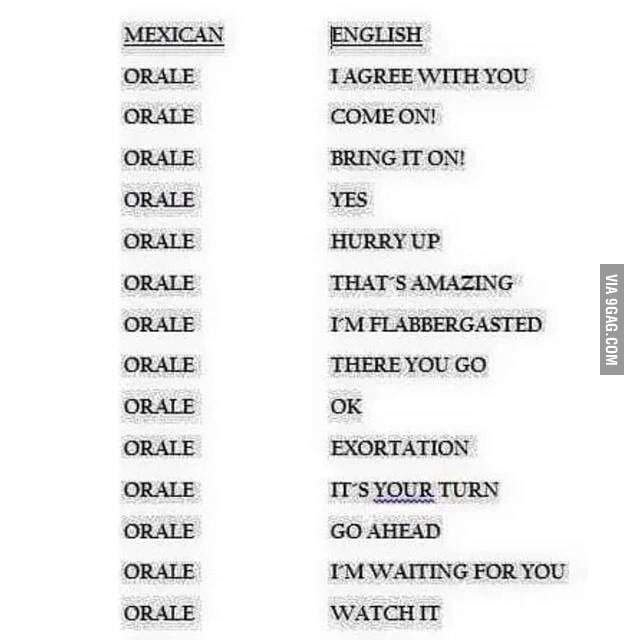 Órale can also mean hey, as you say, though it's not in the charts.

Ese is used around the border, and inside the US. Güey (like way) is more common elsewhere. And ¿qué onda? or ¿qué pedo? (= what fart?), instead of ¿qué hay de nuevo?
D

De Madrid al Cielo
Español-España.
You should def use something local. Órale or qué onda...would work I guess.