a beached whale of a man

Lebanese
What does the bolded expression below mean?

The run from which they were now returning had been to one of the McMansions in Sugar Heights, where a man named Harvey Galen had called 911 complaining of terrible chest pains. They had found him lying on the sofa in what rich folks no doubt called ‘the great room,’ a beached whale of a man in blue silk pajamas. His wife was hovering over him, convinced he was going to punch out at any second.
Source: End of Watch by Stephen King

This is a real beached whale 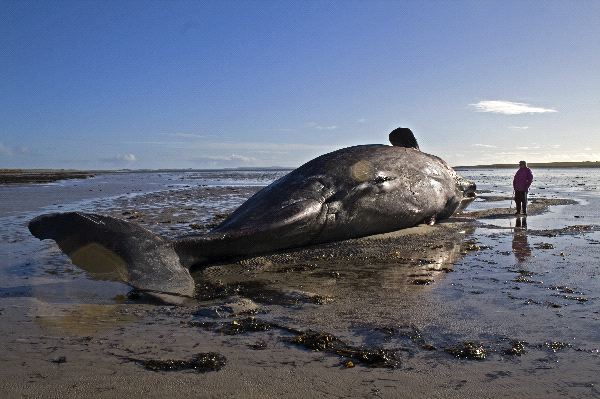 Massachusetts, U.S.
English - U.S.
Obese people on a beach are sometimes referred to (when they can't hear; this is not a nice thing to say) as "beached whales." King uses this familiar phrase to describe Galen's appearance even though he wasn't on a beach.