Japanese
In the article of CNN: How beautiful design is keeping libraries relevant in the digital era, there are sentences :
Indeed, over one million books are available, housed in bookcases
which are stacked on different levels, creating a terraced effect. A "people mover system" --
essentially, a wheelchair-friendly sloped elevator-- takes guests to the level they want to get to.

Question) Please explain the meaning of the underlined sentence.

Colorado
English-US
I know that it is "wheelchair friendly" (easily accessed by people in wheelchairs). I know that it is an elevator. What does "sloped" mean in talk about elevators? I imagine that the shaft of the elevator sits at an angle rather than being straight up and down. I've never seen one before. It's even possible that the system looks more like a ski-lift than it does a traditional elevator.

Oregon, USA
USA English
people mover is in our dictionary. Have you read the definition?

Colorado
English-US
I must confess that I hadn't, Herr Graham. Do you picture something like a moving sidewalk that goes upward at an angle?
Last edited: May 22, 2018

Oregon, USA
USA English
In my experience "people mover' is a very general reference to anything that moves a large number of people. 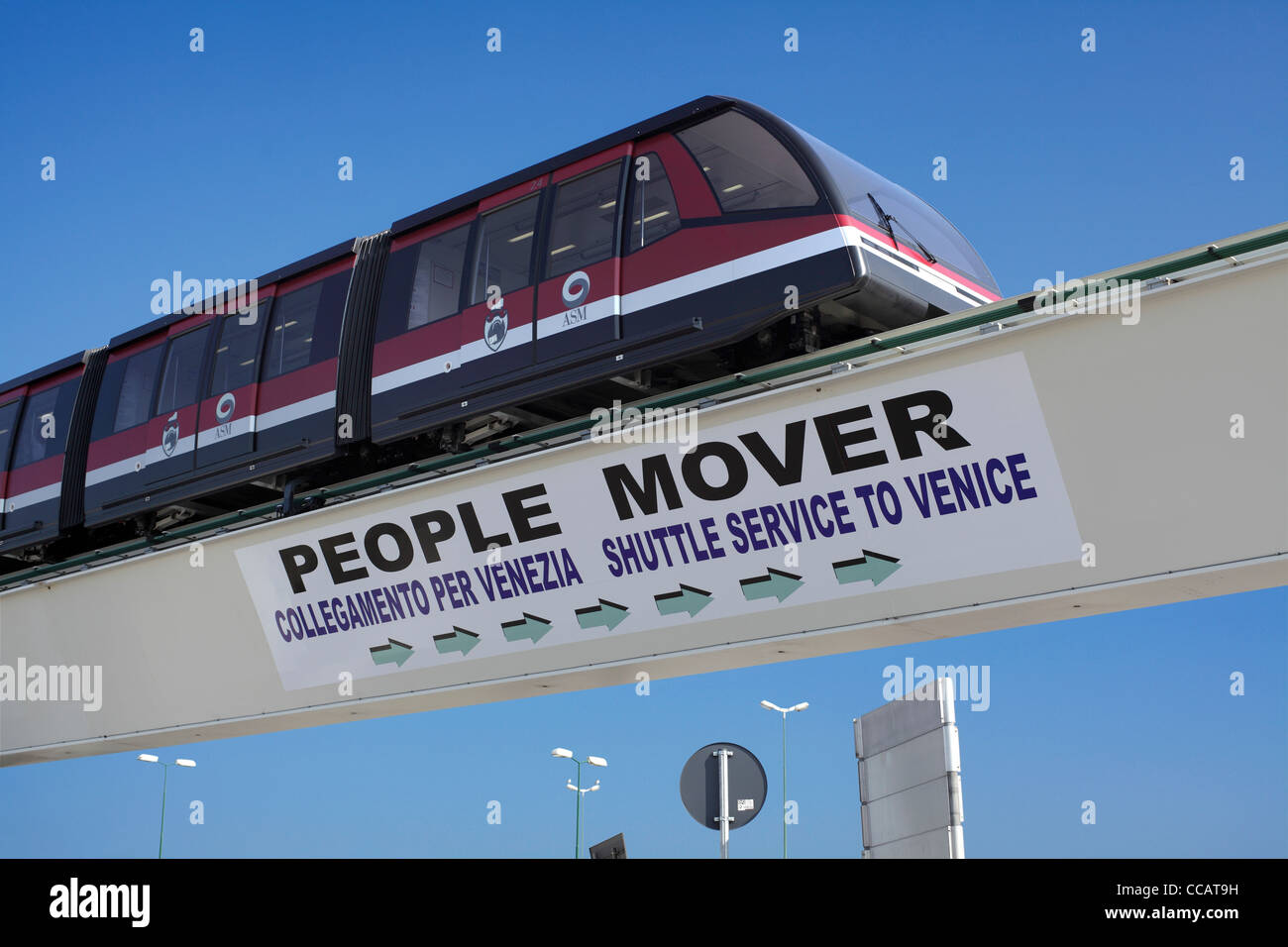 Coventry, UK
English UK Southern Standard English
The fact that the original article puts the phrase in inverted commas, combined with the fact that it's situated in a library (and presumably therefore at least partially indoors) suggests to me that it can't be anything like the people movers which are similar to monorails or miniature trains.

From the limited detail given in the OP's bold underlined sentence, I envisage something like a cross between a lift and an escalator.
K

Japanese
I really want to thank all the commentators for giving me important informations.

From Wikipedia: Moving walkway:
A moving walkway or moving sidewalk (American English), known in British English as a skywalk, travolator, or travellator, is a slow-moving conveyor mechanism that transports people across a horizontal or inclined plane over a short to medium distance. Moving walkways can be used by standing or walking on them. They are often installed in pairs, one for each direction.

These can operate on a slope – in fact our local Tesco uses them for taking people and shopping carts/trolleys (which automatically lock into the surface of the walkway) up and down one floor level.

These walkways are also used in conjunction with escalators in the Central–Mid-Levels escalator and walkway system (Wikipedia) in Hong Kong:
The Central–Mid-Levels escalator and walkway system in Hong Kong is the longest outdoor covered escalator system in the world. Engineered by French company Constructions industrielles de la Méditerranée, the entire system covers over 800 metres (2,600 ft) in distance and elevates over 135 metres (443 ft) from bottom to top. It was constructed in 1993 to provide a better commute by linking Central, SoHo and Mid-levels on Hong Kong Island. 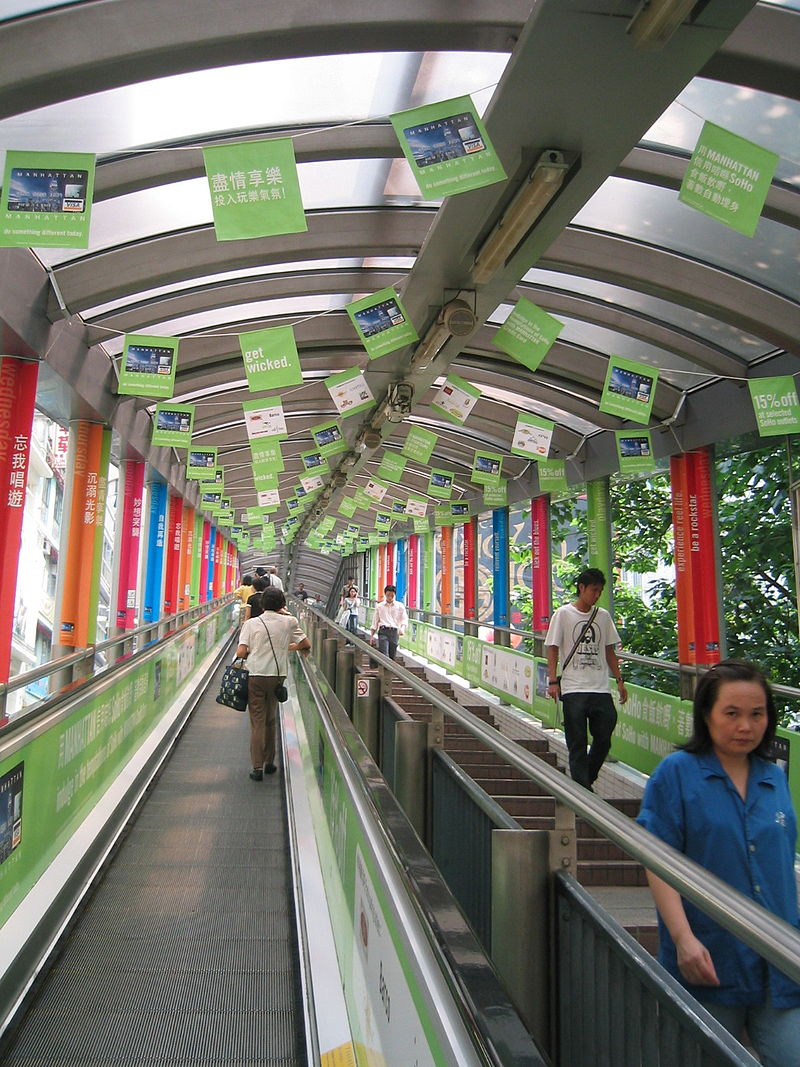 I would think that people in wheelchairs would have to hold their large wheels in place to use the elevated walkways going up, so that they don't move – although going down would allow them a some speed and freedom.

(Hong Kong decided to only put in only one system – it goes down in the morning and up in the afternoon and evening. If you're going the opposite way, you take the stairs.)

Now, having said all that, it occurred to me to look up some photos of the inside of the Qatar National Library, and what I see are wheelchair-friendly switchbacks that will exercise your body while you're looking to enlighten your mind. They don't appear to be my idea of moving walkways or escalators (except in the most primitive sense, in that you can elevate yourself from one level to the next). 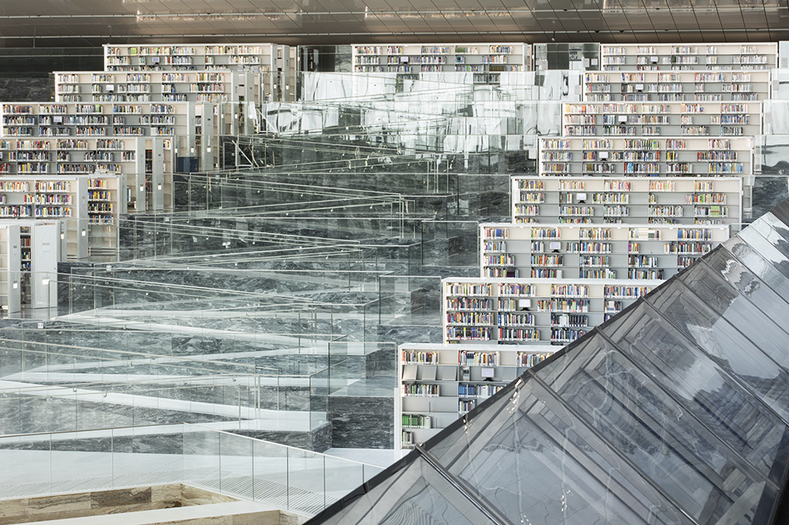