Persian (Iran)
Does "Here, a traditional female pursuit kept women out" mean the product of women's hand work (patched fence) kept women themselves out of that area?

Context:
In 1997, West Berkshire Council gave Kippin a commission in the form of a year’s residency at Greenham Common, a massive US airbase near London that housed ninety-six ground-launch Cruise missiles and Europe’s longest runway. Sustained and powerful protest by the women’s peace movement had gained the site an international profile.<——-Excess quote removed by moderator (Florentia52)——-> Kippin photographed potent details of the women’s connection with the site – for example, a patch of ‘darned’ perimeter fence. Here, a traditional female pursuit kept women out (Art and War by Laura Brandon).
Last edited by a moderator: Sep 8, 2018

English - U.S.
One of the common tasks of a housewife in the past was to darn (mend holes) in her family's socks. It was considered women's work.

The women at the base didn't mend the fence, the military authorities mended it, but the author is saying that mending is traditionally women's work but now it was preventing women from doing what they wanted.

To be honest, it's kind of a silly thing to say. No one talks about "darning" a fence, and mending a fence is not a traditional female activity.
Last edited: Sep 8, 2018

London
British English
The image is striking if you think of mesh metal fencing not dissimilar from knitted fabric, surrounding an all-male preserve protecting destructive weapons, nuclear missiles. Man the destroyer and woman the creator and mender sort of thing, keeping the fabric of society together.
Darning wasn't just for socks - any knitted garment might need holes repaired. Darning is a weaving stitch. I loved darning but just because I didn't absolutely have to do it. All our socks were knitted by my grandma and all our jerseys and sweaters, winter underwear. All wool, of course. Heck, I even had a knitted swimsuit when I was about five. Those were the days, -not! 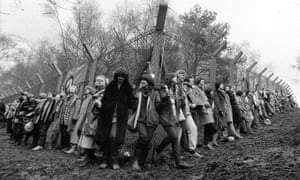 Hermione Golightly said:
All our socks were knitted by my grandma and all our jerseys and sweaters, winter underwear. All wool, of course. Heck, I even had a knitted swimsuit when I was about five. Those were the days, -not!
Click to expand...

English UK
As I recall, the Greenham women did actually cut and then 'darn' the fence.