a trench of rock

Republic of Korea Korean
Hello everyone. I would like to know what "a trench of rock" means in the following sentences:

His right arm rose, seized. He pulled with both arms, thrust with both legs. He saw a trench of rock beyond the edge, glimpsed sea, saw whiteness on the rocks and jumble. He fell forward.

This is a novel published in the United Kingdom in 1956. The novel mainly follows the state of mind of a sailor called Christopher "Pincher" Martin, a temporary naval lieutenant who is apparently desperately fighting for his life in the Atlantic after the military ship has sunk. Here, he has arrived at an island in the sea and now is struggling to climb up after having realized that the waters are rising because of the high tide.

In this part, I am wondering about what "a trench of rock" would mean.
I learned from the WR dictionary that "trench" could mean one of these entries:

But, since this trench of rock is on an island, I thought the first definition would not be the case.
But then this is not a sea bottom either, so I am confused...

USA / EEUU
English - US
It would help if we knew what "beyond the edge" refers to, but I assume that the trench is some kind of natural formation.

Wales
British English
A trench can be, and probably usually is, something you dig. There was trench warfare in the First World War, for example. Or you can dig a trench to lay a cable.
There's the Mariana Trench, a natural formation. I don't see what this kind of thing has to do with civil engineering.
It sounds as though there was a natural trench in the rock.

Brittany, NW France
English (Midlands UK)
I immediately though of this sort of rock formation (Pointe de Primel, Brittany). There is a deep trench in the rock on the right-hand side. Synonym: cleft. 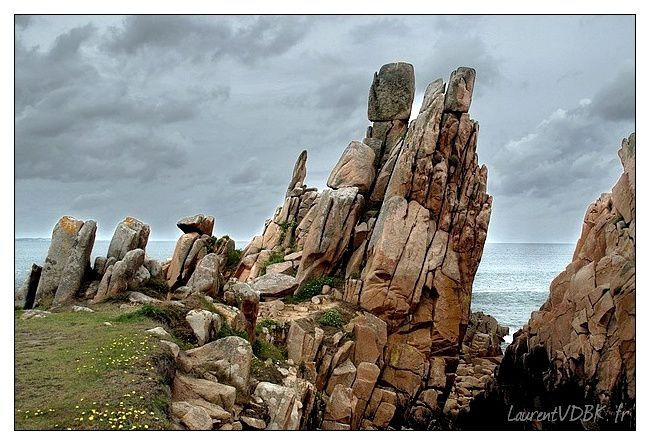 Thank you very much for the explanations and the picture!


The Newt said:
It would help if we knew what "beyond the edge" refers to,
Click to expand...

Of course! In case this might be helpful, here are some more sentences right before the quote. And I guess here the "edge" appears:

The man was lying with one foot on a limpet, held mostly by friction. But his foot was on one limpet and the second one was before his eyes. He reached up and there was a possible handhold that his fingers found, provided the other one still gripped the limpet by his face. He moved up, up, up and then there was an edge for his fingers.

Tea Addict said:
His right arm rose, seized. He pulled with both arms, thrust with both legs. He saw a trench of rock beyond the edge, glimpsed sea, saw whiteness on the rocks and jumble. He fell forward.
Click to expand...

So, "trench" would mean "cleft", which means a naturally dug part of rocks. It does not have to do with military or civil engineering meanings, but it could just mean something which is naturally dug among the rocks!
It would be opposite to "hill" probably, in that trench is concave and hill is convex.

I sincerely appreciate your help.

Wales
British English
Glad to help. They're called trenchcoats because British army officers wore them in the trenches.

Thank you very much for the explanation.
Wow, now I learned the origin of trench coats all thanks to you! So it was "trench" coats because British army officers wore them in trenches.

I recently bought myself a trench coat, and I think I would remember that fact as I wear it...