Russian
Hello, everyone!
As we know, a block can be a square area formed by four city streets within which there are buildings.
I'm not sure that it's true for American, British, and Australian cities, but in the city I live these blocks are numbered (please, correct me if I've chosen the wrong word) 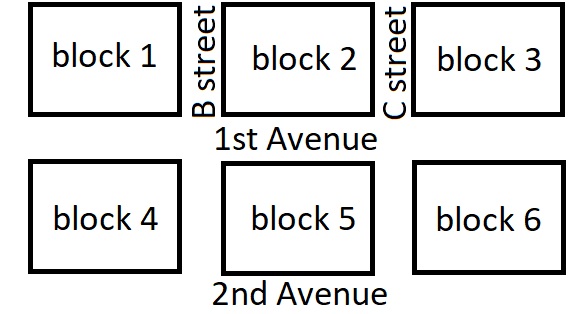 And, finally, the thing I'm wondering about and would appreciate your help with is how an English-speaking person would say the exact block (with a number) they live on.
Would it be:
a) I live on the fourth block. Like in "I live on Fifth Avenue".
b) I live on block 4. Like in "We're in Room 204"

Further to this question, which preposition should one use? (I believe it's okay to ask this question in the same thread, isn't it?)
"on Block 4" as in the example from LDOCE (block | meaning of block in Longman Dictionary of Contemporary English | LDOCE): She grew up playing with the other kids on the block.
Or "in the 4th block" as it's a 3D area.

Thank you for your time and help in advance.

Penang
American English
I would use "in" – and I've never heard of block numbering, so it's a new concept.

I take the point of "playing with kids on the block," but here, "on the block" is a set phrase. I would still choose "in Block 4" for a specific block location, but if I were standing in block 4, "I live on this block" or "I live in this block" would work for me. Complicated enough?
Last edited: Feb 19, 2018
E

Massachusetts, U.S.
English - U.S.
Blocks are not numbered in the U.S. However, in some cities streets are numbered, and building numbers start with a multiple of 100 whenever a new numbered street is reached. For example, when a street crosses 3rd Avenue, the first building after that would be 300 on one side, 301 on the other. Suppose building numbers on that block go up to about 320, and then the street crosses 4th Avenue. The next buildings would be nos. 400 and 401. There would be no buildings with numbers from 320 to 399. In this situation, people often say "I live in the 500 block of X street." That means the same as "I live on X street, between 5th Avenue and 6th Avenue."
W

Boston, MA, USA
English - American
I think the block is typically the stretch of road between two intersections (as opposed to the square labeled areas in your diagram).

In a big, grid-based city like New York City, you'd typically define your block in terms of the "cross streets" -- "drop me off on Broadway between 70th and 71st."

As Egmont says, you can often refer to the "### Block" of a street. You'd often hear something like that in a police report: "officers responded to an incident at the 400 Block of Racine Avenue."
B

Copyright said:
I take the point of "playing with kids on the block," but here, "on the block" is a set phrase. I would still choose "in Block 4" for a specific block location, but if I were standing in block 4, "I live on this block" or "I live in this block" would work for me. Complicated enough?
Click to expand...

No, this is perfectly clear to me. Thank you for helping me out in this if-there-was-block-numbering-how-would-you-say-it situation.
B