be not happy with something vs. not like something

Polish
I've noticed English likes to use "be not happy with" in the sense of "not like". Or does it differ from "not like"?
For example, this police officer came up to a man who was recording a police station and she said "I don't know who you are and actually I'm not happy with your behaviour". So, if she'd said "I don't know who you are and I don't like your behaviour", would the meaning be the same? Or would the meaning be more similar to "and I'm worried/anxious by your behavior"? 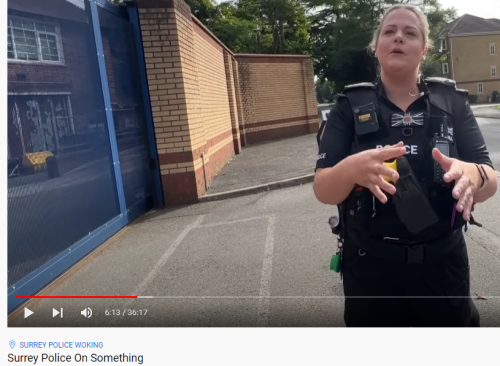 zaffy said:
I've noticed English likes to use "be not happy with" in the sense of "not like". Or does it Do they differ from "not like"?
Click to expand...

Yes. See the rhetorical device "litotes". It is related to understatement and meiosis - all Wiki links.

Sonoma County CA
English (UK then US)
I don't see much difference - especially when intonation and body laguage often communicate such sentiments more than mere words! I'm not sure worried or anxious comes into it - it's whether the officer thinks it might be illegal.

So I guess the first sounds less direct, doesn't it? Say I'm talking to my brother, referring to the way he treats his wife.

zaffy said:
So I guess the first sounds less direct, doesn't it?
Click to expand...

zaffy said:
Say I'm talking to my brother, referring to the way he treats his wife.

The first would elicit the response "What do you mean?" or "In what way?"
The second would elicit a violent response.

Polish
And does "dislike" work too? If so, does the level of confrontation/directness change in any way?

Sonoma County CA
English (UK then US)
I don't see any of these "distinctions" that clearly.

JulianStuart said:
I don't see any of these "distinctions" that clearly.
Click to expand...

"I am not happy with that" could mean anything from "A slight improvement is required" to "That's vile". It's human nature for the listener not to assume the worst but rather to react as if the former is meant. This keeps the temperature down.

"I don't like that" is a direct negative statement

To me there is a difference here. The first one is sort of inappropriate whereas the second one is not.

The second one is a statement of fact. It's something the speaker does not like, honestly stated.

The first one, to me, implies that the speaker has some sort of responsibility for Ashley (or for the brother). It sounds like something a parent might say to child for instance, because the parent has a guardian role over the child. "I'm not happy with the way you have been treating your sister." It implies strongly that the behavior needs to change and there will be consequences if it doesn't. In a relationship with a brother and sister-in-law who are both legal adults, you can't say that, in my opinion. You are not in a position to impose consequences.

kentix said:
To me there is a difference here.
Click to expand...

Any difference here? Say a teacher's talking to a student of theirs.