Philippines
Tagalog
When we sleep, we cover our bodies with a piece of clothing (of certain thickness) which I have always called a blanket. As far as I know, the sheet is used to cover the bed.

I was surprised to see in my visual dictionary that both the blanket (first layer) and the sheet (second layer) are used to cover the mattress, and that the comforter is used to cover the body when it is cold.

Can you confirm that information? What do you use to cover your bodies when you sleep: a blanket or a comforter?

South East England
English - England
In the UK, when we use a blanket, we generally use two sheets. One covering the mattress, and one between us and the blanket. We sleep 'between the sheets'. Nowadays, however, I think it's true to say that most people use a quilt, or duvet, probably with just one one sheet, covering the mattress.

I believe a quilt is called a comforter in AE. (?)

American English
I use a sheet, then on top of that a blanket, and then it the winter, a comforter on top of that, i.e., 3 layers.

For me, a comforter is a "reinforced" type of blanket. It is thicker and puffier than a normal blanket.

English - United States
You have a fitted sheet, which is the one with elastic edges that fits the mattress snugly. Then you have the flat sheet, which has straight-seamed edges and is tucked in at the end of the mattress and covers you. Then you might have a blanket during the colder months. There's also an electric blanket, which is a plain blanket that you plug in and heats up. I put mine on top of the flat sheet. Blankets can be made of soft, fluffy polyester or acrylic, or a combination of the two.

A comforter is the top covering and is usually thick and bulky. It covers everything, but doesn't drop to the floor. It usually covers half way down the sides of the bed. The bottom is set off with some kind of a bed skirt or bed ruffle, which is placed between the box springs and the mattress. You COULD use the comforter as a blanket/covering, but it's not a blanket. Another full covering you can use in place of the comforter is a bedspread, which does touch the floor.


A smaller sized version of a blanket is called a throw. If you can plug it in and it gives off heat, it's called an electric throw.
T

English - Canada
I'm with AngelEyes and Perpend as to the making of the bed (fitted sheet + [flat] sheet + blanket or bedspread or both), but the word "comforter" sounds dated to me. My mother (in her 80s) would use it to refer to a heavy quilt or a duvet, whereas I would simply call these items a quilt or a duvet.

I prefer blankets of the old-fashioned kind, made of wool.
P

New York City
English - US
No, HeyPresto, quilt and comforter are both used in AE. I believe "quilt" has been discussed in an earlier thread. Here are some pictures of comforters. "Duvet" isn't much used here, not as much as in BE anyway.

Parla said:
No, HeyPresto, quilt and comforter are both used in AE. I believe "quilt" has been discussed in an earlier thread. Here are some pictures of comforters. "Duvet" isn't much used here, not as much as in BE anyway.
Click to expand...

These are the same as what we call (continental) quilts, or duvets. I think there may be a confusion here with patchwork quilts?
C

California
English - US
Here is an earlier thread on the differences between these: Quilt / Bedspread / Cover / Eiderdown / Duvet

However, it doesn't have much American English input. I believe you are right, Heypresto. For the most part, what we call quilts are what you probably call 'patchwork quilts', though we have some quilts that are not patchwork, but simply quilted (verb sense #3).

Connecticut
English - US (Midwest)
A quilt can be patchwork (have a top made up of small pieces of different cloths, usually arranged in a pattern) or have a top made of a single piece of cloth, but either way it consists of two layers of cloth with some form of batting (filling) between them. A "comforter" is usually an extra-thick quilt. I call them both quilts, because a) that's a shorter word and b) I'm pretty sure I was an adult before I ever heard of a "comforter."

At the store where I work, we sell a lot of "comforters"; I'm not sure if we sell any "quilts."

RM1(SS) said:
I call them both quilts, because a) that's a shorter word and b) I'm pretty sure I was an adult before I ever heard of a "comforter."
Click to expand...

Twenty or so years ago, the decorative thing that most people in the US used to cover a bed was a bedspread. At some point, bedspreads went out of fashion and comforters and duvets (a plain comforter with a removable decorative cover) came into fashion. A bedspread is generally lighter than a modern comforter but much heavier than a sheet and it is often a single layer of heavy fabric. A bedspread also goes all the way to the floor so you didn't need a dust ruffle to hide the box spring. I wish I could find more bedspreads as my bed does not work well with a dust ruffle.

Myridon said:
A bedspread also goes all the way to the floor so you didn't need a dust ruffle to hide the box spring. I wish I could find more bedspreads as my bed does not work well with a dust ruffle.
Click to expand...

Are dust ruffles what we call valances? 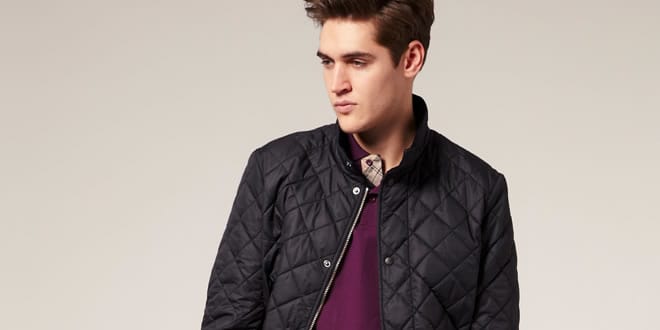 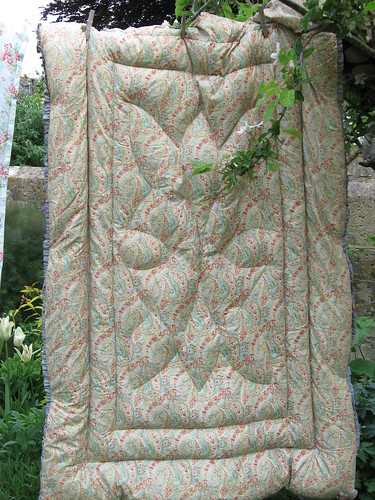 Distinguished from a duvet by the fact that it is designed to lie on top of the sheet or blanket on top of the bed only, not extending over the sides.
Comforter (word not used in BE) 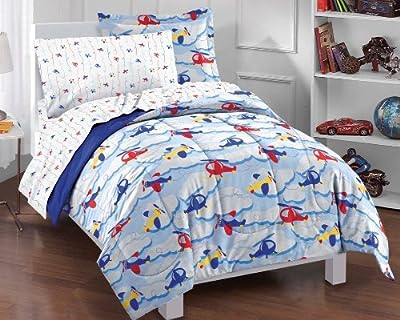 This seems to be the same as a duvet, i.e. a sack filled with feathers.

Are dust ruffles what we call valances?
Click to expand...


This seems to be the same as a duvet, i.e. a sack filled with feathers.
Click to expand...

Comforters may or may not be filled with feathers. I've never used (or even seen) a duvet before to make a comparison myself, but I found this description:


Duvet and comforters are forms of blankets or quilts taken as protection from the cold. The differences between a comforter and a duvet lie in the material they are made of and their usage.
A comforter is a thick, quilted, fluffy blanket intended to keep the user warm. It is usually filled with synthetic fiber filler. A Duvet is a type of bedding - a soft flat bag traditionally filled with down or feathers, or a combination of both and used on a bed as a blanket.
Source: http://www.diffen.com/difference/Comforter_vs_Duvet
W

English - USA
Is "counterpane" still used in the UK?

UK
English - England
I remember my grandmother using the word in the mid-50s but I have not heard it since.

Connecticut
English - US (Midwest)
While we're on the subject of bedding....

In various books by British authors (Swallows and Amazons and its sequels come to mind) people are described as taking "rugs" on camping expeditions. Are they actually taking floor coverings to use as bedding, or is "rug" in this case a term for some sort of heavy blanket?

England (aged 78)
UK English
Perhaps they took travel rugs (https://encrypted-tbn1.gstatic.com/...nQq38gc57hi60TrHlhYi2qZtyT729K3yWUtEV0xaErQAr). These are used for picnics and are not as large as blankets in my experience.
You must log in or register to reply here.
< Previous | Next >
Share:
Facebook Twitter Reddit WhatsApp Email Link
Top