Lebanese
A faint unease came over him; nevertheless he picked up the martini glass and swirled it, watching the olive at the bottom bob slightly in the drink’s chilly depths.

Source: The Shining by Stephen King

What does the bolded phrase mean? In this scene, Jack is imagining the bar coming to life.
Is bob a verb and the olive the subject? Why not the olive bobs? Is it an olive print at the bottom of the martini glass? What is the drink's chilly depths mean?

Wisconsin
English - United States
Martinis are typically made with an olive. He's watching the olive bob (yes, "bob" is a verb here), so "bobs" would be incorrect. "Chilly" and "depths" both have their standard meanings, though the phrase is a bit of a hyperbole.

Connecticut
English - US (Midwest)
A martini: 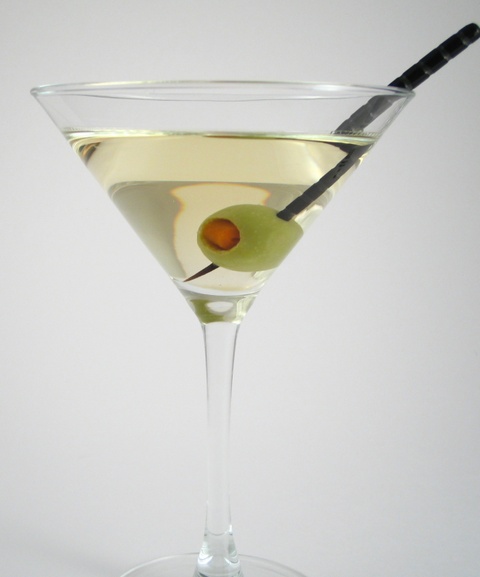 Jack's olive is bobbing, so it's probably not on a skewer like this one is.

Lebanese
Thank you. Awesome. I had never known that Martini is served with an olive (on a skewer) and I was oblivious of the inverted conical shape of the Martini glass. It makes sense now as Martini has a bitter taste I guess.

It's a very powerful drink, since vermouth derives from a wine that is repeatedly distilled so that it's alcoholic content increases, as does its viscosity, actually becoming somewhat syrupy, and gin, while thin, is notoriously high in alcohol and is flavored with juniper berries, giving it an herbal undertone of taste. (It was first used as a medicine in the Middle Ages.)

(That's why you usually hear it said as "sipping a martini" (as though through a straw, although using a straw is frowned up) rather than "drinking" a martini, since even dedicated heavy drinkers find it more reasonable to imbibe them slowly, so as to judge how inebriated they are becoming.

Typically people might play with the olive as they slowly drink this concoction, and most people finally eat the olive after the martini is finished, popping it into their mouths as a final treat.)
You must log in or register to reply here.
< Previous | Next >
Share:
Facebook Twitter Reddit WhatsApp Email Link
Top