After studying the creaky and checked tones, it appears that they are merged. Both have short vowels with an abrupt end (glottal stop).

In Shan language, there is only one tone with an abrupt end (creaky). Shan doesn't have both (creaky) and (checked) like Burmese. Shan just has (creaky) as its only tone with a glottal stop.

So the question is this, are creaky and checked tones merged in Burmese?

If not, then what is the difference in creaky and checked as I have listened to many audio examples online and I am not hearing the difference.

Please don't reply with "You're wrong, there is a difference" unless you can linquistically explain your position with references.

Note: I do believe there was a difference in the past. However, I am just hearing 1) creaky 2) low and 3) high and that is it. So I am wondering how this "checked tone" fits into the "3 tone system"? It would seem to me that the "checked" is merged with the "creaky". There has to be an answer. I have did a lot of research on this and never ending opinions was just too tiring. I just decided to listen to as many audio examples as I could and make my own analysis.
J 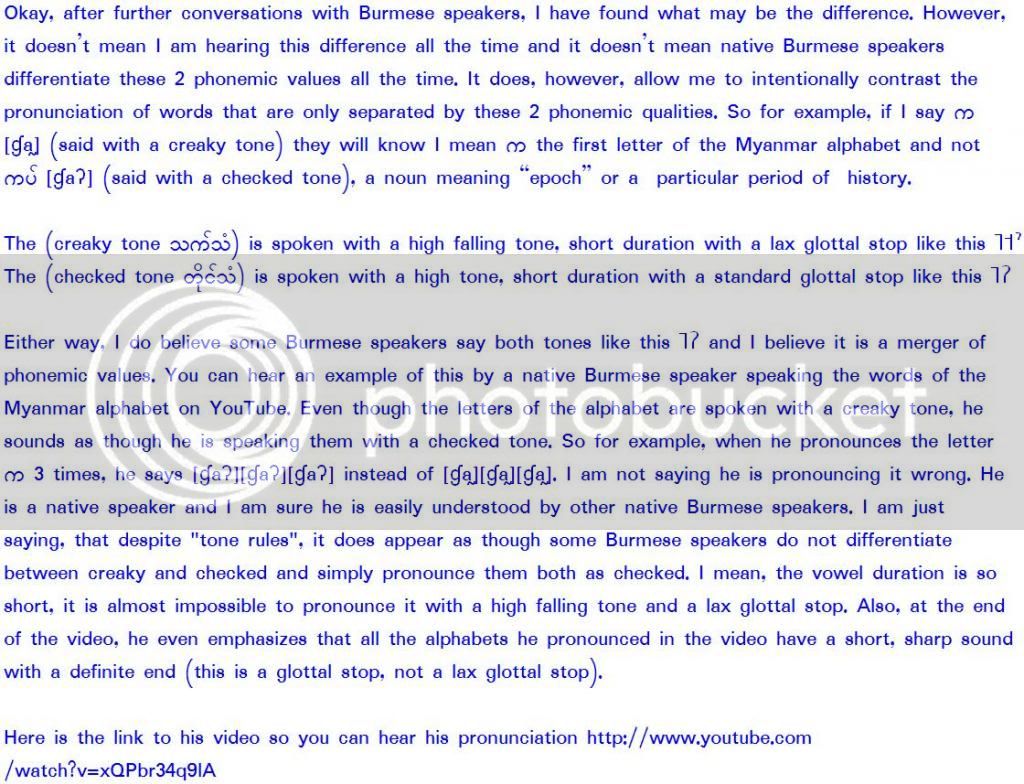 I entered part of my reply as an image because it contained some IPA symbols that may or may not display for everyone. However, as an image everyone can view it with no problem.

francais-France
Your question is about distinguishing creakyness and glottal stop. If you have a look here , one of the given examples is the Danish stød, defined as a kind of creaky voice (laryngealization), that may also be realized as a glottal stop, above all in emphatic pronunciation". So phonetically the glottal stop consonant and the creaky prosodic feature can result in utterances close to each other.

I also hear a glottal stop at the end of the syllables spelled out by the burmese speaker on Youtube, but I think spelling out a syllable separatedly and pronouncing it in a speech act 'sandwiched' between other syllables is quite different. Generally the Burmese creaky tone sounds to me a bit higher than the checked (stopped) tone and shortly pronounced unlike the speaker enumerating the letters in order to make them as clear as possible. I've also listend to the Myanmar Basis.Episode I on the same page : From about 5 min. after the beginning of the video the speaker pronounces the letter က with its name ကြီး , the creaky tone is followed by a plain high pitch and I don't hear any glottal stop between both syllables. It's also interesting to hear ( 12 or 13 min. ) what he says about the three tones and how he tries to transcribe them. His lecture could be clearer , but anyhow he shows that tones can be expressed differently from one to another person.

I'd like add J.Okell's remarks about tones in Burmese. J.Okell , now retired, was for many years a lecturer at the SOAS ( University of London ) and published various books on Burmese language ( Northern Illinois University ) . These are some of his explanations :

There are two other kinds of syllables. Though they don't have a place in the three-way contrast just described, they are often referred to as tones, and are listed here for completedness:

I- အတ် High pitch followed by a glottal stop, called a "stopped" syllable
II- အ Low pitch, only on the vowel a, called a "weak" syllable. Also called "reduced" or "unstressed" syllable
( Bold type from myself )

American English
Jezu be J.F. de TROYES, you really put a lot of effort into that answer. I appreciate it. My take on this issue now is to listen and determine what someone is saying based on the comparison to surrounding words in their speech (i.e. creaky is only creaky because its glottal stop is lazy in comparison to a more defined glottal stop in their other words which I shall determine are checked). I mean, like you said, each person has their own unique voice and I can't hold someone to a spoken standard that is determined by whom? (school teacher? online YouTube video? grammar book? cab driver?).

I don't regret gathering all the linguistic information. It definitely helps, but ultimately, you speak by listening to others speak. I can re-hash this over and over, but it is neither here nor there. I know what creaky (this tone exists in Hmong) and checked (this tone exists in Cantonese) are supposed to sound like. My error was trying to hold people to my linguistic views of how things should sound. It is more efficient for me just to listen to people speak and learn what their so called creaky vs checked sounds like and let them define it in speech. Also, I have learned asking native speakers about tones at a linguistic level is not happening anyways. They are not going to understand "lax glottal stop" and they aren't going to know what "tone letters" are or what a "glottal stop" is. Sometimes when you learn something, you forget there was a time when you didn't know it yourself. So sometimes, I get frustrated when I ask a native what tone is this and they can't answer (yet, they can easily pronounce the word).

On the flip side, it immensely helps if you can speak a language and understand linguistics. For example, I can speak Thai (at an intermediate level) and when other foreigners ask me about Thai language, I can explain to them about tones in a way that they understand. Partly,because I learned tones using tone rules instead of via word memorization. I can take a word I have never seen written in Thai script and determine the tone and explain that to an English speaker in a way they can understand. I also know the name of the tones in Thai (even natives can't tell you the names of the tones). They end up saying "listen, blah blah blah...." and that is the limit to their explanation. They can simply pronounce the word for you to try and copy them. You can't ask Thais the number of the tone either, because they don't know tones by name or number. The only thing they remember from school is the tone exercises "ma ma ma ma ma" each syllable pronounced with one of the 5 Thai tones. So basically, I said forget this, learned the tones on my own. Thai, unlike Burmese, has 5 clearly defined tones without all the tone sandhi like Mandarin. This makes it easier to learn for a non-native speaker.
You must log in or register to reply here.
< Previous | Next >
Share:
Facebook Twitter Reddit WhatsApp Email Link
Top