Lebanese
What does the bold expression below mean ?

“Go by the costume shop—it’s the trailer between Park Services and the carpentry shop. Tell Dottie Lassen I sent you. Damn woman’s busting her girdle.”
Source: Joyland by Stephan King

This is what Pop, the team leader at an amusement park, tell his new hire, Devin Jones, what to do next.

I recall that girdle is the sitting bone. Does this mean that her bust is wide as her girdle ???

Northern California
English, USA
The damned woman is bursting her girdle. Girdle: a belt sash or the like worn at the waist.

"Go by the costume shop-it's the trailer between Park Services and the carpentry shop. Tell Dottie Lassen I sent you. Damn woman's busting her girdle."

"What I want is for you to get on your pony and ride."

I read "busting her girdle" here to mean that she's impatient (for someone to help her do something or attend to her).
S

Pennsylvania
English - US
Even without the line about "get on your pony and ride," I interpreted the girdle comment as a way to express impatience.

Greece
British English (Sussex)
I imagine that the "girdle" is the elasticated piece of underwear that some women wear/wore, to keep their abdomen and bottom looking trim, rather than the sash worn round the waist. Since it's just a metaphor it doesn't really matter though. 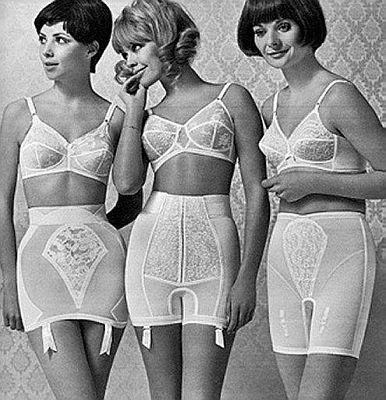 Northern California
English, USA
Ah yes, I had forgotten about the elastic girdle.

jacdac said:
I recall that girdle is the sitting bone.

This is not right, though sometimes the whole pelvic bone might be called the pelvic girdle.
You could have checked that with a dictionary, but even then I am not sure it would help you to decode what King means. Even with the help of others in the thread it still seems odd to me!

Northern California
English, USA
I suspect this is a parallel usage to "busting his britches".

Lebanese
Thank you. You are right. I was incorrect about my initial guess of girdle. But I still do not understand the meaning of busting the girdle or busting the breeches. Where is the sense of urgency in this expression ? Is it a common expression to bust the breeches ? When would you bust your girdle or your breeches ? Does the expression 'get on your pony and ride' imply the urgency ? Does it have an idiomatic connotation ?

London
British English
The expression 'get on your pony and ride' means nothing to British me, except that it makes me think of "The Ride of Paul Revere", which somehow or another I am familiar with. He was an American patriot in the war of independence who made an epic urgent midnight ride to warn his compatriots about British plans.
(I stand to be corrected!)

I'm not familiar with "busting /bursting britches" or "busting/bursting girdles", but I am sure that 'girdles' here does refer to those tummy restraining, slimming garments once worn by women. I personally associate girdles with the 1960's and '70's.
(We British schoolgirls did wear 'girdles' round the waists of our 'gym slips' in pre-modern times, just like ancient Greeks and our mothers before us. In my school we wore yellow woven type wool 'girdles' with our brown gym slips until we were 15, but I doubt very much that this sort of fabric, knotted belt is meant here.)

I both know and occasionally use the expression to "bust a gut", but nowadays only of other people's efforts, because after almost a life-time of pointless 'gut- busting' I gave it up for more rewarding activities.
That expression means 'to go to great lengths to do something' and it's not quite the same as what I understand by 'busting her girdle'. I'd say that that means being very enthusiastic as well as putting a lot of effort into something and being very impatient.

I can't quite transfer these ideas as precisely as I'd like to this very unfamiliar context.
Last edited: Feb 21, 2016
S

Pennsylvania
English - US
I agree, Hermione. I think I'd have to know more about what was going on in the story between Pop and Dottie Lassen (and what Devin Jones has to do with them) to be sure of how to interpret "busting her girdle." My guess is that Dottie has expressed a wish to speak to Devin or to any qualified party who represents Pop on (probably) several occasions. So Pop tells Devin to go see her to, for lack of a better expression, get her off his (Pop's) back. Without the context we all seek to answer this more accurately, that is the best we can do is guess.
You must log in or register to reply here.
< Previous | Next >
Share:
Facebook Twitter Reddit WhatsApp Email Link
Top