Czech and Slovak zem: how old?

Санкт-Петербург
Russian
Czech and Slovak have a word zem/zem “earth”. Sources I have checked routinely derive it from the late Common Slavic zemļa, but there is actually a more archaic form zemь (an i-stem originating from the former consonant type). Is there enough evidence to rule out the derivation directly from this zemь? The Slovak declension (which must be more reliable than the Czech one since it didn't experience the Czech-type fronting of vowels after palatal consonants) in many cases looks continuing the consonant type: the singular zem, zeme, zemi, zem, zemi (that is, all except the instrumental zemou), the plural zeme.

Санкт-Петербург
Russian
The modern Macedonian dz is, if I recall correctly what Lunt wrote, always secondary: it even doesn't continue the Old Macedonian ǳ from the second palatalization like in ѕѣло you mention. Ukrainian, too, has instances of secondary ǳ and ʤ (for example in дзеркало, дзвонити, джерело). If this were not so sporadic, one could think that the languages tried to create full-fledged pairs to ʦ and ʧ.

Update. No, there is at least ѕвезда. So, some ǳ are older. Yet, in zem- the z is much more ancient, its formation precedes the Slavic palatalizations, so the retention of ǳ would be very strange in a language that otherwise lacked affricates.

Update 2. As a possibility: *dzō, though I don't know if this ǳ still hadn't passed to dh at the time of the Slavic invasion.
Last edited: Sep 4, 2020

Prague
Hungarian
Hello, interesting question. I think the situation is more complicate din Czech, since it uses both země and zem. I think země is more used for the planet and country while zem for the soil. I wonder if there was a difference zemļa, and zemь . I think Slovak uses only zem. My Czech etymology dictionary does not even mention the word zem, the origin of země is from zemlja. My Slovak etymology dictionary says: the Slovak zem is from zemь.

ahvalj said:
No, there is at least ѕвезда. So, some ǳ are older.
Click to expand...

By the way, in the text on the picture below it is written ЅЕМЛЕМѢРIЕ. Was Ѕ in this word pronounced as [d͡z] or [z] ? 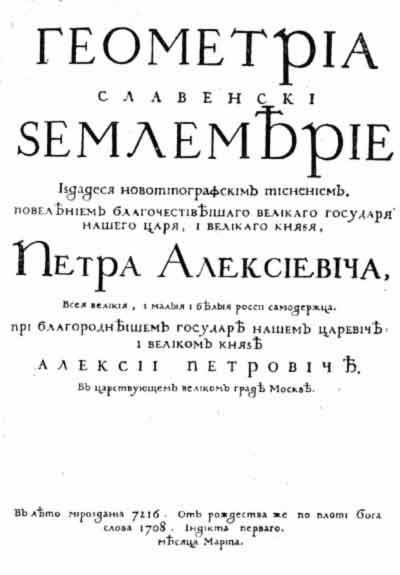 Санкт-Петербург
Russian
There is no evidence that East Slavs ever pronounced з and ѕ differently: to the end of the 10th century, when the Cyrillic alphabet was introduced with the Christianity, both sounds were pronounced /z/ by them, and so these letters have been doublets since then. Peter I originally chose ѕ for his civil alphabet, and the book you mention was the first one printed this way. Soon, however, he changed his mind and came up with з. Note that he also had eliminated и here, which he then reintroduced as well.

In ѕвер /dz/ is secondary, of in-Macedonian development. Dz in late Common Slavic arose as a result of the second and third palatalizations, and in some dialects also as a result of assibilation of *di̯: for example, Polish has nodze, pieniądz and miedza, in Czech all have further simplified to z: noze, peníz and mez. There is a simple rule: when Lithuanian has ž and Latvian z, the corresponding Slavic z is old, Balto-Slavic, like in žvėris : zvērs : звѣрь. The only seeming exception is žvaigždė : zvaigzne : звѣзда, where the ancient attestation of ѕвѣзда and especially the West Slavic forms with g>h (gwězda, gwiazda, hwězda, hvězda, hviezda) show that Slavic inherited the dispalatalized form of this word, with *gⁱʰ>g (instead of the expected >z), and the South and East Slavic outcomes are results of the second palatalization (like in цвѣтъ : květ).
You must log in or register to reply here.
Share:
Facebook Twitter Reddit WhatsApp Email Share Link
Top