destroyers in a <V screen>

Republic of Korea Korean
Hello everyone. I would like to know what "a V screen" means in the following sentences:

The destroyers in a V screen turned back together. Between orders he listened to the shivering ping of the Asdic and the light increased. The herd of merchantmen chugged on at six knots with the destroyers like outriders scouring the way before them, sweeping the sea clear with their invisible brooms, changing course together, all on one string.

This is a novel published in the United Kingdom in 1956. The novel mainly follows the state of mind of a sailor called Christopher "Pincher" Martin, a temporary naval lieutenant who is apparently desperately fighting for his life in the Atlantic after the military ship has sunk. Here, he has arrived at an island in the sea. And he is now asleep in his shelter in a crevice. In his dream, he remembers the situation when he was on the ship. (I learned this in other thread: this ship and another ship called Wildebeeste here were turning simultaneously in a zigzag motion to confuse German ships during WW2.)

In this part, I wonder what "a V screen" would mean.
I have absolutely no clue as to what a V screen might mean.
So I am guessing that it could be a nautical/military term to describe something that I cannot guess at all, so I just wanted to ask you.

Madrid
UK English
I don't actually know what it means but it sounds as if it might be a V-shaped formation, i.e. the six boats formed the shape of a V. This is just a guess!

France
English - Scotland
Each ship was equipped with sonar (ASDIC=sonar), but these devices have a limited range and one ship on its own might not detect an enemy submarine. The ships formed a V shape to maximise their collective detection capacity.

Thank you very much for the explanations.
So "screen" means the formation of destroyers, like the following meaning in our WR dictionary!

12. a protective formation of small vessels, as destroyers, around or in front of a larger ship or ships.

I can imagine smaller ships are enveloping a larger vessel in the V formation.

So, in the sentence, the ships in the V formation changed their courses back to their original course together(=turned back), rather than that they rotated backwards.

And the reason for this V screen would be to increase the ships' radar capacity.

I learned so many new things all thanks to you.
I sincerely appeciate your help. 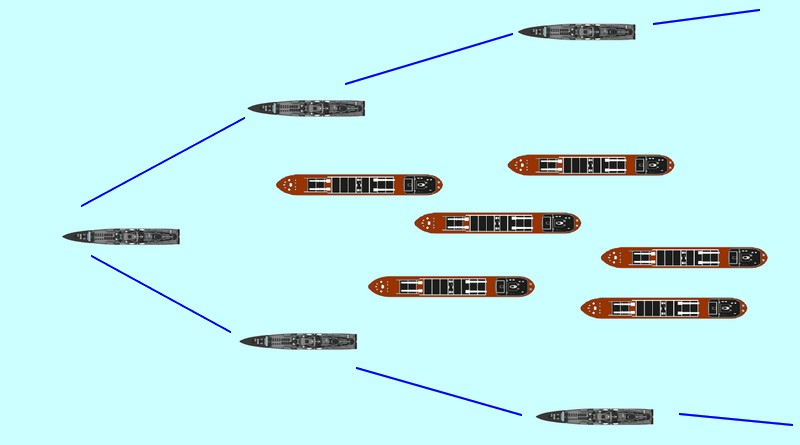 The warships are in a V formation. They act to screen the merchantmen from enemy attack.

Thank you so much for the explanations and the picture!

So "screen" itself does not mean "formation," but means the "act of screening the surrounding area to prevent enemy attack"!

Oh, I think I was picking a wrong dictionary definition then... In that case, would "screen" perhaps have the following definition in our WR dictionary?

10. a system for screening or grouping people, objects, etc.

Madrid
UK English
I'm wrong, then. It's screen in the sense of protection. They formed a V-shaped screen around the merchant ships. It's nothing to do with radars. Definition No. 2 in the Merriam Websters Dictionary: Definition of SCREEN
Last edited: Jan 29, 2022

Tea Addict said:
12. a protective formation of small vessels, as destroyers, around or in front of a larger ship or ships.
Click to expand...

Tea Addict said:
Oh, I think I was picking a wrong dictionary definition then...
Click to expand...

Thank you so much for the explanations!
So "V screen" would mean "V-shaped formation" as in the 12th entry in our WR dictionary.
And they moved in such formation to detect enemies by using their radar! (Probably this V formation helped to overcome the limit of the radar range, as suggested in #4.)
I truly appeciate your help.

English - U.S.
A screen is something that stands in between two things for protection or concealment. Your windscreen screens you [protects you] from the wind while you're driving. A screen porch protects you from insects because the screen material doesn't let them through*. A line of hedges around a property can form a screen that prevents travelers on the road from seeing the house and grounds.

Tea Addict said:
And they moved in such formation to detect enemies by using their radar!
Click to expand...

Yes. The idea is to prevent torpedoes hitting the merchantmen by detecting submarines and destroying them with depth-charges. ASDIC = Sonar

Thank you very much for the explanations!

Oh, now I think I see the idea! So the formation is described as a "screen" because it is a shield to protect the main ship in the middle from the enemies. The formation itself is like a mosquito net, filtering mosquitoes from entering therein.

I now see that this "screen" has two connotations--it means the "formation" of the ships, while meaning that this formation of the ships is the "protective shield" that prevents the enemies from penetrating.

And this protective shield is enabled by detecting submarines using the radar! The ships in this V formation screen the sea, filter the enemies by attacking them with depth charges before they penetrate the formation.