How would I write "Clean/Wash your heart" (as a command) in Hieroglyphics, and how would it be pronounced?

(I found this image related to the Book of the Dead, but I just want "Wash/Clean your Heart", and not "with vengeance")

English - U.S.
The hieroglyphs given in your sample do not mention "vengeance"; they literally say "wash heart". Taking vengeance is mentioned by the author as an example of how an ancient Egyptian might have tried to cleanse his heart, but the words taken by themselves (without considering what the expression might have meant idiomatically) don't say anything about vengeance.

Edit: the writing of "wash" in that example - feather, arm, water - looks correct to me for the imperative form of the verb. If you want to add the word "your", tack on one of the following after the heart and the short stroke under it:

It's very difficult to give pronunciations for ancient Egyptian words because the vowels were not written, and in some cases the symbols used to transliterate the consonants don't correspond to how scholars think they were actually pronounced (on top of which, pronunciation changed over time). Take a look at the Wikipedia article on "Transliteration of Ancient Egyptian" to get some idea of the intricacies involved.

In Manuel de Codage transliteration, "wash your heart" would be:
But remember that all the letters used here - even "i" and "a" - represent consonant sounds in the original language.
Last edited by a moderator: Dec 7, 2017

English
Thanks! So would this be the correct way to write iai ib.k?

And if I changed "wash/cleanse" to "purify" could I change the feather-arm to the 'man with a jug' (Gardiner's A6) hieroglyph? 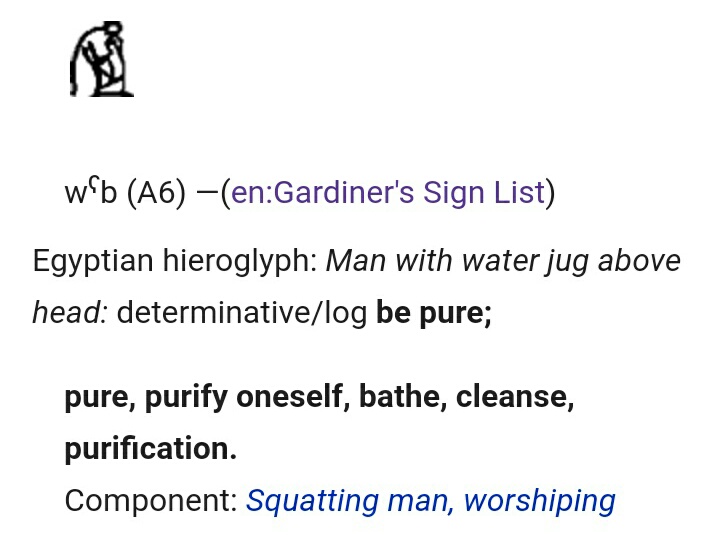 English - U.S.
Your drawings look good. As for wab, Faulkner's dictionary* doesn't show any spellings with both A6 and N35a (the three water ripples). A6 seems to be used by itself. The other ways of writing wab involve D60 "foot with water streaming":

When you say A6 is used by itself, does that possibly mean I could write this: 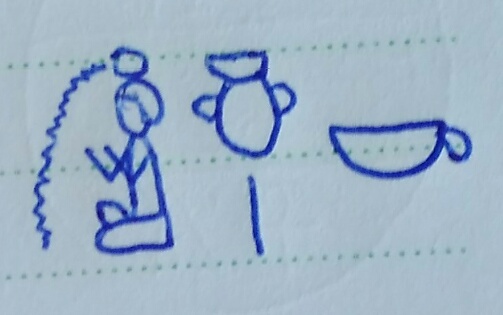 English - U.S.
A6 is perfectly good. It seemed to me that you were talking about replacing the feather + arm with A6 in the original spelling, which would have left you with both A6 and N35a, and I just wanted to point out that Faulkner shows no such writings. But there are examples with just A6 all by itself.

I don't think this means, by the way, that an Egyptian scribe would necessarily have considered a writing with both A6 and N35a to be wrong; it just means that there was no such writing in the corpus that Faulkner was working from.

English
Thank you so much !