Skopje, Macedonia
Macedonian
In a previous thread, it was mentioned that the forms "engemet" and "tégedet" are incorrect because they are double accusatives. I saw some similar explanations on some Hungarian websites. I was wondering what the reasoning behind this is, because although "engem" and "téged" are used as the direct object forms of "én" and "te", they do not appear to be accusative forms, but rather possessive forms (since the "-em" and "-ed" suffix indicate first and second person singular possession respectively), i.e. they are semantically accusative but not etymologically (I hope that "semantically" and "etymologically" are the appropriate words to convey the distinction I am speaking of). Therefore, wouldn't it make more sense to say that they are not double accusatives, but rather obsolete/dialectal/archaic/uncommon accusative forms of possessives which have now taken on an accusative function?

I am wrong to analyze the personal pronouns this way, and if so, could someone explain to me the other reasoning?

Thank you in advance
O

Toulouse
français - France
You are right in a historical sense, but within the modern language you are wrong. Modern Hungarian only uses "engem" and "téged", so the "-et" forms look like the typical "double suffix" uneducated speech that says "aztat" instead of "azt", "tiedé" instead of "tied", "honnantól" instead of "honnan", etc. But historically, "engemet" and "tégedet" were certainly formed in a way parallel to "minket" and "titeket", then the absence of the "-t" object mark after any personal suffix can already be found in old texts and has evolved into the present situation where "-t" is optionally dropped only after a suffix for 1st or 2nd person singular: "add ide a kezed!" (give me your hand) rather than "kezedet", and always dropped in educated speech in "engem" and "téged".
-- Olivier
Last edited: Jul 26, 2013
G

Hungary
Hungarian - Hungary
Exactly, they are dialectal/archaic and not a double accusative. People can be quite hateful when it comes to non-standard language use, so those that speak these dialects are often said to "not know proper Hungarian". Therefore the "educated" people tend to abandon these dialects.
Earlier it was more common: Some famous poems (Petőfi: Egy gondolat bánt engemet) and folk songs (Tavaszi szél: ... én tégedet, te engemet) use these forms.

Sidenote: in some dialects "mink" actually means "we" in nominative (instead of the standard "mi"), which may or may not be a back-formation from "minket".

gorilla said:
Sidenote: in some dialects "mink" actually means "we" in nominative (instead of the standard "mi"), which may or may not be a back-formation from "minket".
Click to expand...

Is there any literature available online on the dialects matter in general?

Hungary
Hungarian - Hungary
I would just like to point out that the forms "engemet" or "tégedet" as such/in themselves are not incorrect.
They may be archaic or dialectal (or simply a bit strange to hear/read) in general but whether they are used incorrectly depends on the sentence they appear.

NagyKiss said:
Is there any literature available online on the dialects matter in general?
Click to expand...

Yes, there are but it is a really large topic, so you would have to restrict your search in one way or another. (Apart from the fact that the majority is in Hungarian...)
F

123xyz said:
... I think that considering the plural counterparts, "minket" and "titeket", my suggestion makes more sense. It appears that "minket" is formed with an accusative suffix added to a possessive form, "mink-", meaning something like "our we" ...
Click to expand...

It seems to be a bit more complicated ...

It is supposed, that the -n in some personal pronouns is an archaic Uralic pronominal suffix, e.g. én, ten(magad), ön; minä, sinä, hän [I, thou, he/she/it in Finnish]; mon, ton [I, thou in Udmurt] etc ... The exact function of this suffix is not clear (at least to me).

From this point of view, mink (we) could be interpreted as the plural of *min (a possible predecessor of én) and minket is a regular accusative of mink (as in case of ő>ők>őket or ön>önök>önöket).

(It is interesting that the corresponding pronouns for we and you [plural] in nominative case generally do not contain this -n: Hung. mi, ti; Finnish me, te; Udmurt mi, ti, Komi mi, ti ...)

francisgranada said:
From this point of view, mink (we) could be interpreted as the plural of *min (a possible predecessor of én) and minket is a regular accusative of mink (as in case of ő>ők>őket or ön>önök>önöket).
Click to expand...

That seems interesting, but if that is so, does it mean that "titeket" is the accusative form of "titek-", the plural of "tit-", rather than the second person plural possessive of "ti"?
F

123xyz said:
That seems interesting, but if that is so, does it mean that "titeket" is the accusative form of "titek-", the plural of "tit-", rather than the second person plural possessive of "ti"?
Click to expand...

Yes, in theory, but I do not know the exact etymology of titeket. At the first glanse, it seems to me that here we have a double accusative: tit itself could be an accusative (without the presence of the morpheme -n). Maybe this tit was later "reinforced" by the plural endig -k to avoid possible ambiguities or by analogy with mink (see the dialectal form tik instead of ti) and then the accusative marker -t was added once more.

P.S. For better understanding: -nk is not the original form of the possessive suffix of the 1st pers. plural, it's rather the result of a later contraction. See e.g. "isemüküt" (= ősünket) in a manuscript from the 12th century. This isemüküt can be clearely decomposed: ise (ős) + m (possessive 1.pers.sg.) + k (plural marker) + t (accusative marker). I.e. as if we had today: ősöm (my ancestor), *ősömök (our ancestor), *ősömöket (accusative of our ancestor).
Last edited: Jul 28, 2013
A

it was mentioned that the forms "engemet" and "tégedet" are incorrect
Click to expand...

No! It's not true. Engemet and tégedet are fully correct.

The "doubling" makes the message stronger only. Much stronger. Always. 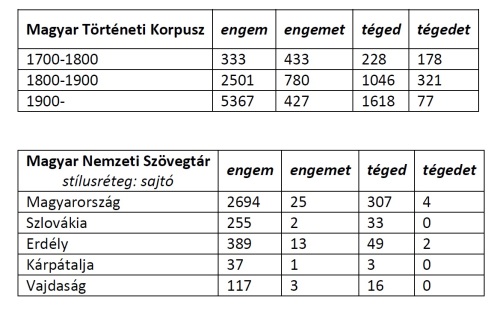 I'd like to add some observations of mine to your interesting statistical research:

1. The frontiers between the States in the Carpathian basin are the result of a political decision and they do not respect neither the real ethnic nor the linguistic situation. So, for example, the dialectal variants of Hungarian spoken in Slovakia do no form a common "Slovakian Hungarian dialect", but they are rather part of different dialects spoken in the both sides of the frontier.

2.The words engemet and tégedet are quite widespread in the spoken language, in the sense that independently on the dialectal region, the same person may use occasionally both the forms: engem'/téged and engemet/tégedet.

3. For curiosity, in some dialects also the form őtet is used (instead of őt) in the 3rd pers. sg. This is clearly a double accusative, but only regional (as far as I know), i.e. not commonly used. It's generally considered erroneous in standard Hungarian.

P.S. Duplicities of this kind do exist in other languages too, e.g. the Portuguese comigo derives from the Latin cum+me+cum.

Portuguese
In any case, I've NOT done the statistical research and the criteria used in that web site are not mine!

By the way, could you suggest a not too much specialized text or article about Hungarian dialects and their main characteristics? I hardly know anything about what are the different zones and what are the differences between the Hungarian spoken by a csangó or a kún and the "standard" pesti/TV/media language.

Not only in Portuguese, but In Spanish too there is the double "conmigo, contigo, consigo" that come from cum-mecum, tecum, secum, and even the funny expressions "subir arriba, bajar abajo, salir a fuera, entrar a dentro" (go up upward, go down downward, go out outward, come in inward": this duplicities run in the Iberian blood I guess!
Last edited: Sep 23, 2020
F

ausermilar said:
In any case, I've NOT done the statistical research and the criteria used in that web site are not mine!
Click to expand...

Of course. I beg your pardon for the imprecise formulation .....

By the way, could you suggest a not too much specialized text or article about Hungarian dialects and their main characteristics?
Click to expand...

Please write me a private message and I'll try to answer all you questions, as far as I am able .... However, the substance is that all the present-day Hungarian dialects are mutually understandable, far not like e.g. the Italian dialects or regional languages of Italy .....
Last edited: Sep 23, 2020
You must log in or register to reply here.
< Previous | Next >
Share:
Facebook Twitter Reddit WhatsApp Email Link
Top