English - UK
The Welsh dictionary GPC does not have an etymology for 'tebyg', so could it come from Latin 'typicus'? The phonology seems to match up, and the semantic shift could be 'distinctive, characteristic' > 'resembling, similar to'.
The only problem is that 'typicus' does not have any non-learnt forms in other languages. But then again Welsh does have a habit of retaining Latin words lost in the Romance languages.

A dictionary of the Welsh language, by William Owen Pughe

England
Welsh - Northern
I wouldn't give much credence to the works of William Owen Pughe. In Late Middle Welsh, the 'short, clear y' sound became i before g (written as c). So such forms as meddic, tebic are common, with unaccented ultimas. The poets used these sounds to rhyme with monosyllables having i (and not the clear sound of y.) Morris Jones contends that Modern Welsh meddyg and tebyg are in fact artificial forms. (1913: 110f)

It's tempting to think that tebyg therefore is derived from Latin, but using Pughe as a source for this is fraught with danger (Morris Jones does not) as WOP was of the generation of lexicographers (Welsh and otherwise) who wanted to associate as much as possible his language with the glories of Rome and her language.

I call upon compatriot @Tegs to continue this discussion.
Last edited: Oct 30, 2020

English - UK
Thanks for your replies, folks.

Yes, there is not Latin. 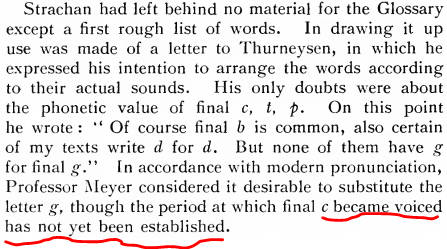 And some "modern" grammar:

England
Welsh - Northern
What is your source for this "modern" grammar? It must predate 1928, at least ... And consequently, does not apply to the language of today, as spelt.

Welsh_Sion said:
What is your source for this "modern" grammar? It must predate 1928, at least ... And consequently, does not apply to the language of today, as spelt.
Click to expand...

You're right: the book's title says "antient". My mistake. Not modern at all:
An English and Welch vocabulary: or, An easy guide to the antient British language. (1804. Page 29). Thomas Evans.

England
Welsh - Northern
May I suggest this instead?