I was just curious as to what the word for the insect, known as the "firefly" in English, is in other languages.

In Jamaican Creole it's "Piiniwaali"

In German, it's "Glühwürmchen". Hm, the official word seems to be "Leuchtkäfer", but I prefer Glühwürmchen (there's also a nice song about it).
R

Brno, Česká republika
Brazílie, portugalština
In Portuguese: vaga-lume or sometimes pirilampo. I've heard that vaga-lume was originally caga-lume (light shitter) but that the name was changed to sound better. Vaga-lume would have a blander translation as light rambler, which doesn't make much sense if you think about it.

Mexico City
México español
In Mayan (spoken in the south of Mexico and some parts of Central america): Kookay

what does tulikärpänen literally mean? thanks.

what does it literally mean? thanks.

and I hope Austrians use: Johanniskäfer.

Encolpius said:
what does tulikärpänen literally mean? thanks.
Click to expand...

It means "firefly" - even literally
N

Moscow, the RF
Russian
Russian:
Светлячок /svetlyachok/; it is an affectionate diminutive form of "светляк" /svetlyak/, which means something like "light one", I believe.

Provence
français
French : une luciole (doesn't mean anything else, just like dog only means dog - but it seems to come from Latin lux).

It may also be called un ver luisant: litterally a glowing worm, although it isn't a worm.
Last edited: Dec 30, 2009

Tagalog
In Tagalog, it's alitaptap.

Finland
Polish
In Polish pretty much like in Czech: świetlik or robaczek świętojański. The 1st one meaning also a skylight and the other one Saint John's little bug.
R

what does it literally mean? thanks.
Click to expand...

This will be a very late response, but I thought I'd write it anyway

Hong Kong, China
Chinese - Cantonese (HK)
Chinese fireflies are very lucky as they have their very own character: 螢 (ying). However, we usually add '火蟲' (fire bug) at the end so it becomes 螢火蟲 (yinghuochong).
D

I was just curious as to what the word for the insect, known as the "firefly" in English, is in other languages.

Never seen/read the spelling you used, but peenie wallie is related to the word peelie wallie from the Scottish dialect. In the Scottish dialect, it refers to a person who's pale/ill-looking. The fireflies give off a pale-whitish/ yellowish light and some make a sound when they flap thier wings or when they fly about, making a thud-like sound upon bumping into stuff. It started out in the early nineteenth century as the single word peelie for a person who is thin, gaunt or pale. As cited from the dictionary, "Dictionaries usually suggest it as an imitation of a slight, high-pitched sound, perhaps a noise that someone in distress might make. If so, it’s linked to another imitative Scots word, peek, for the feeble cry of a small bird, animal and insect noise or whimper of complaint, or an insignificant person with a piping voice", (Quintion 1999). Scottish-Jamaicans started using the term and it became widespread. It's not just Patois slang, but is also Standard Jamaican English.

In Sardinian it's known as "culiluche or culilughe" it's a composite word : "culi" is the Latin genitive of "culus" (ass), it's a relic of genitive present in many Sardinian adjectives, while "luche or lughe" (light) derives from Latin "lucem", accusative of "lux" (with classical pronunciation "lukem" -> luke/lughe). So, if we translate it considering the genitive the meaning should be "light of ass..."

Macedonian
In Macedonian it is known as светулка or diminutive светулче

In Catalonia, the variant used is cuca de llum, which instead of 'worm of light' would translate as 'bug of light'.

(near) Kortrijk, Belgium
Belgium, Dutch
But all in all it turns out to be a flying worm, so it seems, or at least a flying insect... Or what do you think?

ThomasK said:
But all in all it turns out to be a flying worm, so it seems, or at least a flying insect... Or what do you think?
Click to expand...

It's both. The female is unable to fly, she actually has no wings, and it's like a chubby insect with a long segmented abdomen similar to a worm, she lives underground and she produces the light from the abdomen to lure the males to her den. While the male specimen are littler than the female, and they fly, to move fast towards the female's light, also the male specimen produce light from the abdomen.

You can see in the picture below, female and male. 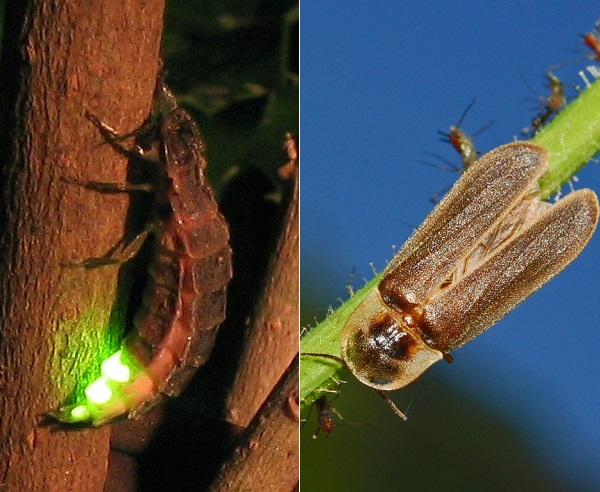 Finnish
It seems to me that "fireflies" is the family Lampyridae, which in Finnish is kiiltomadot (lit. "glowworms"). Some tropical species of Lampyridae are called tulikärpänen (lit. "firefly"). In Finland we have two species of Lampyridae, called kiiltomato (lit. "glowworm") and tuikemato (lit. "twinkleworm").
You must log in or register to reply here.
< Previous | Next >
Share:
Facebook Twitter Reddit WhatsApp Email Link
Top