Give me the child of any healthy, normally intelligent man, and I will make a perfectly competent Ch

chinese
Hi,
Here are some words from the novel Lady Chatterley's Lover(para. 69) by Lawrence(the University of Adelaide,here):
(Clifford asked Connie to give birth to a son no matter who would be the father of the son. And he said the following words)
"I don’t care who his father may be, so long as he is a healthy man not below normal intelligence. Give me the child of any healthy, normally intelligent man, and I will make a perfectly competent Chatterley of him. It is not who begets us, that matters, but where fate places us. Place any child among the ruling classes, and he will grow up, to his own extent, a ruler. Put kings’ and dukes’ children among the masses, and they’ll be little plebeians, mass products. It is the overwhelming pressure of environment." (by Clifford)

Is there a double meaning or sexual suggestion in the sentence in blue please?
Thank you in advance

Northern California
English, USA
I don't see any. "Give me the child until he is seven ..." is from Aristotle.

edit: Lawrence is making a reference to Aristotle. His reading audience would have gotten it immediately. The concept was a BIG area of discussion, especially because it touched on the question of birthright and class distinctions.
Last edited: Dec 31, 2015

Greece
British English (Sussex)
The "Give me a child until he is seven..." quote is usually attributed to the Jesuits. I don't think Aristotle actually wrote it in so many words, though he may have expressed a similar thought. Aristotle is a quote magnet, unfortunately.

What double meaning or sexual suggestion could there possibly be in Clifford's words?

American English
"Give me a/the child until he is seven" is not in the text from the original poster, Redwood and velisarius.

perpend said:
"Give me a/the child until he is seven" is not in the text from the original poster, Redwood and velisarius.
Click to expand...

True. I should have started out by saying that it is my opinion that Lawrence is referencing the famous sentiment.
T

longxianchen said:
Is there a double meaning or sexual suggestion in the sentence in blue please?
Click to expand...

You should be concentrating on the obvious point here, Longxianchen, which is the debate between nature and nurture.

perpend said:
"Give me a/the child until he is seven" is not in the text from the original poster, Redwood and velisarius.
Click to expand...

If Redwood hears in Lawrence's words an echo of a very famous saying, that's a perfectly legitimate point to bring up.

Greece
British English (Sussex)
I'd be pleased to discuss the passage of course, but there doesn't seem to be a language question here. Especially as longxianchen hasn't told us what he has in mind.
P

New York City
English - US
No, there is no "double meaning" or sexual innuendo. All he's saying is that in the age-old question of which matters more, nature (what one inherits from one's forebears) or nurture (the raising of a child), he favors the influence of nurture.
M

London UK
British English
It is not a sexual double entendre but it is, on the face of it, a rather unusual thing for a man to say to his wife ie he doesn't care who is the actual biological father of "their" child; what matters to him is having a child and specifically a son and heir who will carry on the role of the ruling class. (I am taking this from the wider context of the chapter in which this passage appears. Also within the novel even more widely, the context is Clifford's impotence/inability to father a child.)

So, yes, as has been said above, this is also about nature/nurture -- with nature represented by the fact that the father, whomever that might be, should be "healthy" and "normally "intelligent" and nurture by the way that Clifford (Lord Chatterley) will ensure that his child is brought up in the aristocratic family tradition, which will ensure that the child feels that it is his "fate" to rule over the working classes.

So, in fact, as Lawrence is portraying the aristocracy/ruling class here, it is not even all that unusual as something that a man of such a class would say to his wife, especially given his own disabilities.
T

Southern England
English - England
It also says a great deal about the coldness of Clifford's feelings for Connie.

I'm not talking so much about the sentiment as about the way it is expressed.

Thank you for making this point, Miranda. We need help keeping Longxianchen out of the hands of the people who see sex in the dropping of a leaf.

London
British English
Clifford says he doesn't care who the father is, but he's assuming a man of the same social status as him. His true sentiments are revealed later.

longxianchen said:
Is there a double meaning or sexual suggestion in the sentence in blue please?
Click to expand...

I'm puzzled: what double meaning or sexual suggestion could there be, longxianchen?

Gosh, are you being a naughty girl?
I would rather never have a glass of champagne again in what's left of my life, than explain what's being claimed as the double-entendre behind the first syllable of the name 'Chatterley'. I only have a few grey cells left and they need healthy nourishment.
I'm quite capable of writing my very own rubbish.

English UK
I'm sorry, Hermione: I'm being serious. I honestly can't see any double-entendre/sexual suggestion in Lawrence's Give me the child of any healthy, normally intelligent man, and I will make a perfectly competent Chatterley of him. Your replies seem to indicate that I'm missing something really obvious - so could you please tell me what that really-obvious thing is?

Hermione Golightly said:
Clifford says he doesn't care who the father is, but he's assuming a man of the same social status as him. His true sentiments are revealed later.
Click to expand...

I don't think this is correct. Just before the quote cited, it says "‘But he wouldn’t be your own son, of your own ruling class; or perhaps not,’ she stammered." Then immediately follows "‘I don’t care who his father may be, ..." as above.

Where exactly are his true sentiments later revealed, as you suggest?

Also, like Loob and Thomas Tompion, I can't see any sexual double entendre in the precise phrase quoted ("Give me a child ..."). Plenty maybe in Chatterley, Connie etc etc -- as discussed in a separate thread.
Last edited: Jan 1, 2016

London
British English
I'm with ThomasT in general on this one, but the point is that it is not at all obvious, unless you are determined to find double meanings or elements of word-play in the names. I do think that longxianchen's question deserves some sort of explanation. According to the theory referred to in another thread, the explanation is as follows, which I think is irrelevant for longxianchen's purposes if not ridiculous.

The first syllable of 'Chatterley', four or six letters, mean 'cat' in French.
A cat is often addressed and referred to as '(a) pussy' in English. In English, 'pussy' is both slang for the female genitals as well as having a derogatory adjectival use when describing men, meaning weak, cowardly, soft and so on.
The idea apparently is that when Clifford cheerily expresses his confidence that a little Chatterley can be made of any child of Connie's, we should understand that a 'little Chatterley' means a child, a male heir, as weak, soft, ineffectual impotent in the meta phorical sense, and generally useless as he himself is, according to Lawrence's opinions.
Clifford is even more allegorical and cardboard a figure than all the others, I think. It is clear that he represents the uselessness, the end, of the upper classes after WW1.

They are incapable of even physically reproducing themselves as meaningful social beings. So when Clifford delights in the idea of producing a little version of himself, of course Connie is horrified. She's almost at the point of hating him anyway, so the idea of being seen as a breeder of more like him and his useless, empty class/self appalls her.

English UK
Even with your explanation, I fail to see any sexual double-entendre in the original sentence, Hermie.

London
British English
I forget to mention that the word chat is generic in French but chatte refers to a female cat and has the same vulgar slang meaning as 'pussy', from what I can gather. ( I have no personal sense of the French slang meaning, or indeed if it really is used for female cats.)

English UK
But - I'm sorry to boringly insist - that still doesn't mean that the sentence quoted by longxianchen has a sexual double meaning. Miranda's post 20 seems 100% valid to me.
L

chinese
Thank you so much. OK. Now I know it has no double meanings
T 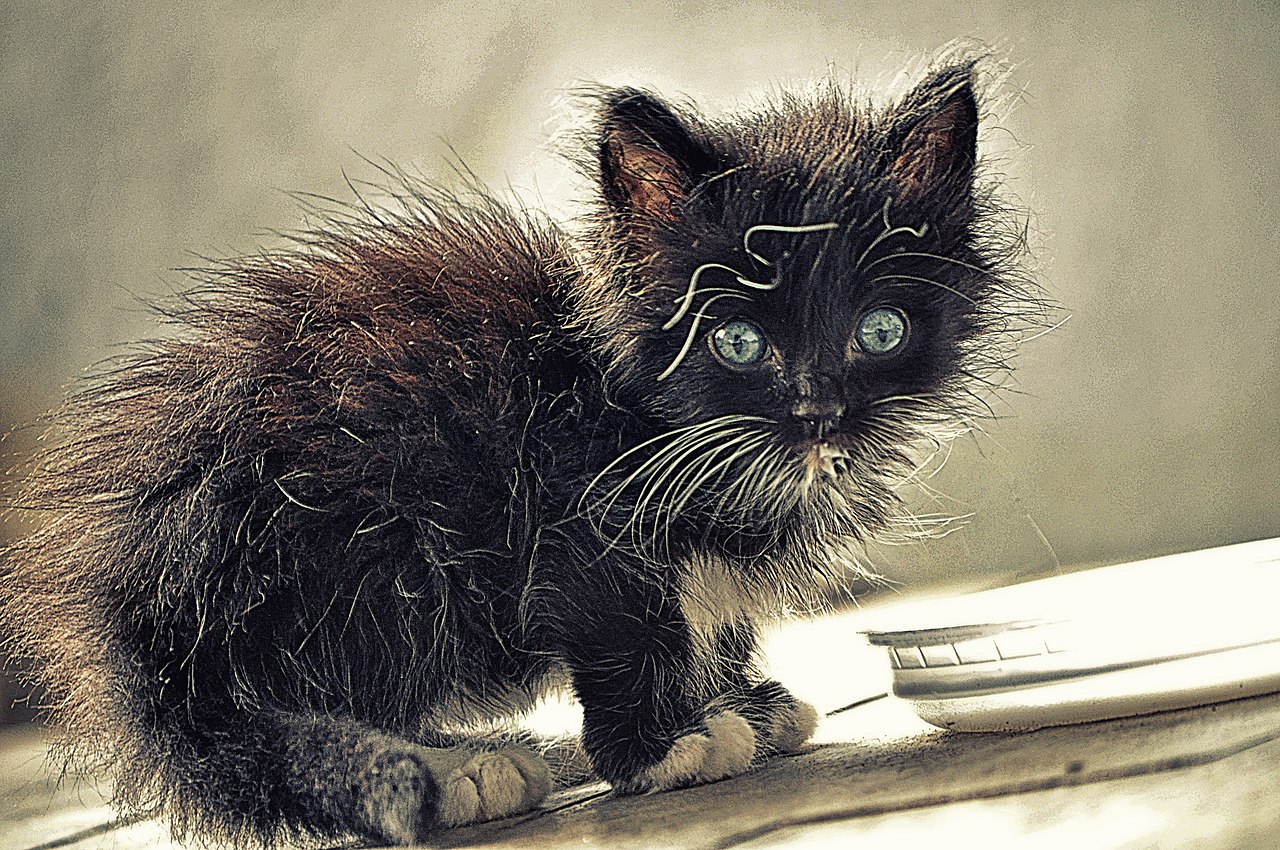 I was rather struck by this photo from the Wiki article on this subject (click). God knows what that will look like when it's grown up.

Irritatingly the Wiki article does not say when the word pussy came to be applied to men to imply feebleness. Some time after 1928 I'd guess. I don't think there's any question of transference of the idea over to Connie's potential child.