St. Ann, Jamaica.
Jamaican English
Hello all,
We have a food here, whose origin is said to be from a Portuguese food called guisado/a (information from google). I don't know much Portuguese but, I speak Spanish and I know there are similarities between the two. The word guisado to me sounds like a kind of 'meat stew'. I'm just wondering if guisado in Portuguese can refer to the process of boiling things besides meat. In the case of gizzarda, grated coconut and sugar is boiled with nutmeg until the mixture becomes brown and has a surupy look. The filling is then placed or pressed onto the baked flour. This is what it looks like. 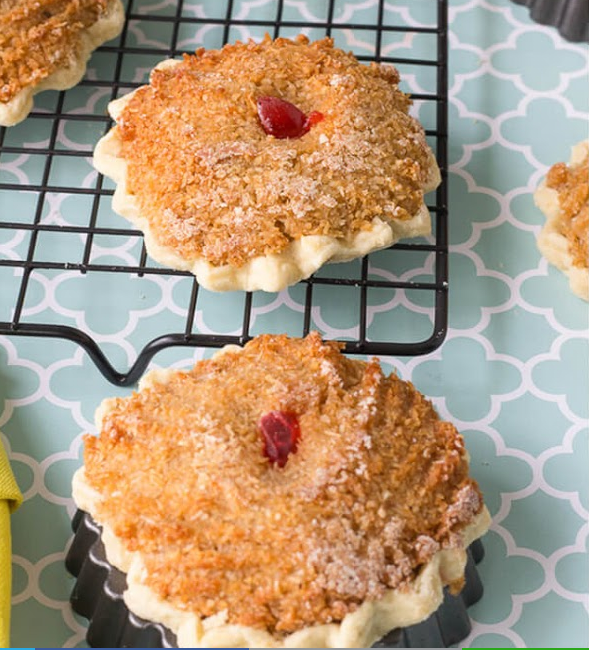 If there's a version of this pastry in Portugal, Brazil etc, I'd like to know the name, please. According to the internet, the pastry is eaten in both the Jamaican and Portuguese cuisine. But, I didn't find any pastry called guisada or guisado online.
Thanks!

Belo Horizonte, BRASIL
Português/ Brasil
Guisado in Brazil is a sort of ragout.
About gizzarda I am trying to remember what that can be. Let me see the recipe.. I will return. For me it looks like our cocadinha.
Last edited: Oct 19, 2019

Paris, France
Portuguese - Portugal
I'm not aware of any present day or traditional Portuguese cookie named 'guisado/a'. In Portugal nowadays a 'guisado' is the same as the Spanish 'guiso'. 'Guisar' is a way of preparing food and 'guisado' the resulting dish (a stew).

Centuries ago, however, 'guisar' had the broader meaning of 'to cook' (any kind of food or dish), therefore one cannot exclude that name just on the basis of its current meaning.
Apparently, there are some similarities between the way of preparing the cookie that you describe and the 'açucarinha' from São Tomé e Príncipe, a former Portuguese colony and an important hub of the slave trade from Central and South Africa to the Americas. I'm just guessing, but maybe it's there the link to Jamaica. It can possibly also explain the name 'guisado', as a just captured slave wouldn't have enough knowledge of Portuguese to use the proper name for the cookie and would rather use a broad meaning one.

P.S. There are a few videos on youTube about 'açucarinha'.

Carfer said:
I can possibly also explain the name 'guisado', as a just captured slave wouldn't have enough knowledge of Portuguese to use the proper name for the cookie and would rather use a broad meaning one.