Republic of Korea Korean
Hello everyone. I would like to know what "her Dickensian manor" means in the following sentences:

Mummy, Madge, and I were gathered around the worn, nicked tea table at Ashfield, a site shot through with memories. Madge had pushed for us to spend Christmas at her Dickensian manor, and in the past, the notion of retreating to Abney Hall, with its vast halls, endless nooks, and unexpected staircases and its decor of burnished woodwork and dusty tapestries, would have enticed. After all, Mummy and I had spent many wondrous holidays there with the Watts family after Papa died. But Archie felt uncomfortable at Abney, even though Madge’s husband and the entirety of the Watts family offered him nothing but an open-armed welcome, especially my dear friend Nan with whom I’d reconnected.

This is a mystery novel published in the United States in 2020. The story is mainly set at the present time in 1926, when Agatha Christie suddenly went missing for eleven days, but also goes back to the past time in the 1910's. In this scene, set in 1921, the narrator Agatha is at her mother's house Ashfield over Christmas to meet her older sister Madge. And she is recollecting how they had come to gather at Ashfield instead of Madge's house called Abney Hall, because Agatha's husband Archie felt uncomfortable at Abney Hall, feeling that his background was starkly contrasted with the wealth of the Abney Hall.

My guess is that, the point here might be the stark contrast between wealth and poverty, so "Dickensian" here could mean "extremely wealthy, as contrasted with the poor living conditions in the Dickensian novels," but I am not sure...

USA / EEUU
English - US
Not everyone in his novels was poor. It might suggest a manor that was old, cluttered, possibly a bit shabby, and full of secrets.

UK
English - England
The Manor is described: "Abney Hall, with its vast halls, endless nooks, and unexpected staircases and its decor of burnished woodwork and dusty tapestries," - Clearly it is not poverty-stricten or dilapidated.

It is a hall/manor house that was designed, and is still decorated, in the style that would have been found at the time Dickens was alive. The period (broadly, Victorian) is characterised by heavy furnishings, elaborate decorations, very high ceilings, generosity of internal space, and a rather depressing/daunting exterior.

English UK
Mmm - it looks as though the author is using Dickensian to mean Victorian...

Brittany, NW France
English (Midlands UK)
Looking like this inside in 1913: 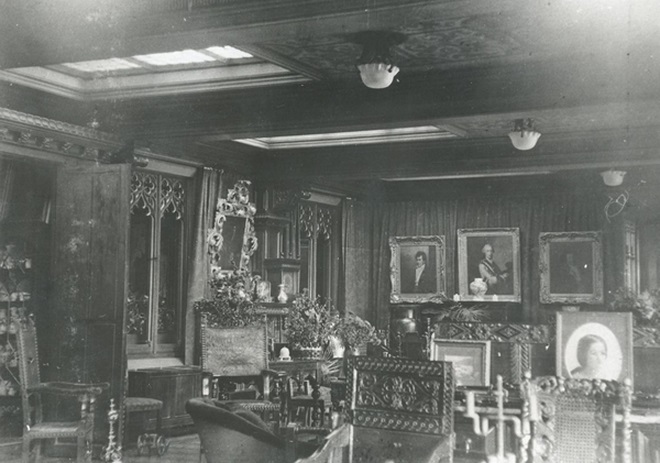 I would say Gothic Revival/Victorian Gothic.

Thank you very much for the explanations and the pictures!
So "Dickensian manor" would mean a manor house that might have existed during the period in which Dickens was alive (the Victorian period), with heavy furnishings, high ceilings, elaborate decorations and a depressing exterior.

Looking at the pictures I think I got the idea as to what this "Dickensian manor" might have looked like!
I sincerely appreciate your help, as always.

Yes, I agree. There doesn't seem to be anything specifically Dickensian to the manor. My first reaction was to think of a specific manor described in one of Dickens's novels, perhaps the dilapidated Satis House in Great Expectations, but this is clearly not the case.