Republic of Korea Korean
Hello everyone. I would like to know what "his wrist doubled" means in the following sentences:

His body was in some other place that had nothing to do with this landscape. It was splayed, scattered behind him, his legs in different worlds, neck twisted. His right arm was bent under his body and his wrist doubled. He sensed this hand and the hard pressure of the knuckles against his side but the pain was not intense enough to warrant the titanic effort of moving.

This is a novel published in the United Kingdom in 1956. The novel mainly follows the state of mind of a sailor called Christopher "Pincher" Martin, a temporary naval lieutenant who is apparently desperately fighting for his life in the Atlantic after the military ship has sunk. Here, he has arrived at an island in the sea. After having struggled to climb up because he realized that the waters were rising because of the high tide, he now lies on the high part of the island.

Brittany, NW France
English (Midlands UK)
It seems to mean "and his wrist was doubled (= folded) against his side".

Thank you very much for the explanation!
In that case, would it be okay to think that his one wrist, rather than two wrists, is folded in half, probably... like this? 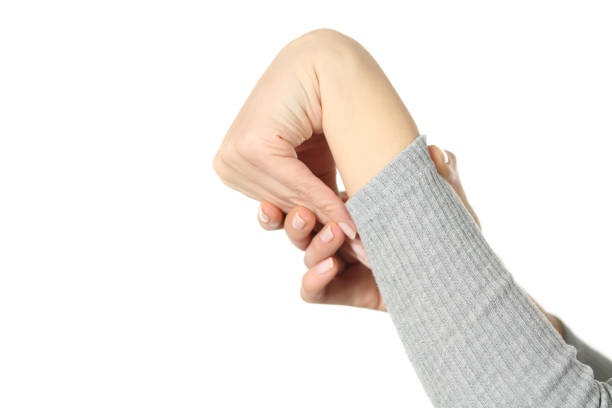 I am just thinking about the ways in which the wrist can be "doubled"... But this picture seems unnatural, I guess.

Also, I am just wondering where this wrist was doubled. It says that the right arm was bent under his body, but then he feels the pressure of the hand at his side... So I became confused!

Would it be okay to think that his wrist is against the flank, the side of his body (the side part of the body under the armpit and above the hip) rather than being under his body, although the right arm connected to the wrist was under his body...?
You must log in or register to reply here.
Share:
Facebook Twitter Reddit WhatsApp Email Share Link
Top