It's clear as crystal that the term is "buck naked" as in as naked as a buck deer, further reinforced in its usage by the fact that a buck-skin is similar to tanned human skin. The term "butt naked" is just another example of mispronunciation that gets ingrained in people's speech. Talk:Buck naked - Wikipedia


Grandma would tuck ya'll into those feather beds in the winter, cover you with two or three of those hand sewn quilts and you would sink bout two feet down into that there mattress. Now that was some mighty fine sleeping, you would be all warm and toasty and that there mattress was so soft you would sleep like a new born baby. Now imagine that same nice warm cozy feather mattress in the heat of a steamy June summer night down here in the South, why you would almost have yourself one of them there heat strokes just a sleepin' by your self never mind havin' your cotton pickin' man layin' there in that darn bed with you and we all know how newlyweds are.
Grandma's Country Kitchen: It's hotter here than a June Bride in a Feather Bed
B

csicska said:
What I'm wondering about is if "buck naked" means "naked as a buck deer" / "totally naked" rather than "butt naked" since your butt can be naked but that doesn't mean that your whole body is too (as shown on Wikipedia below)?
Click to expand...

hungarian
Thank you. Is the "butt-naked" then an incorrect spelling of "buck naked"? Also, does the whole expression play with various aspects of "hotness"?

UK
English - England
You are probably looking far too deeply into what is a comdey line:

This can be understood as

However the overall impression is "Miss Lucy is more sexy that something that is very sexy." with the wordplay on "hot."


csicska said:
Is the "butt-naked" then an incorrect spelling of "buck naked"?
Click to expand...

No, probably a version of "buck-naked" cause by mishearing. Things that don't get written down a lot suffer from this.

There is an interesting thread, if you have an hour or two - on "another think/thing coming" in which one version is clearly a mishearing of the other.)

csicska said:
Also, does the whole expression play with various aspects of "hotness"?
Click to expand... 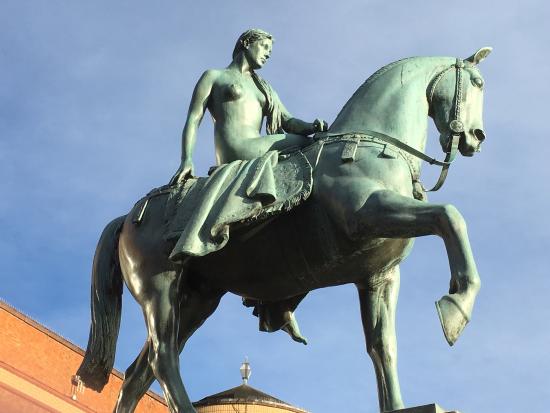