I have no recommendation of that.

Turkish
FBI agents interrogate the employees of a brokerage firm:

Attorney: Gladys Carrera?
Employee1: Doesn't ring a bell.
Employee2: Sorry, I have no recommendation of that.
Employee3: No idea. I don't recall that transaction.

(The Wolf of Wall Street)

What is the definition for "recommendation" here? It sounds to me like "connotation", but its usual meaning doesn't seem to fit here.

Thanks for your help.
A

Fresno CA
English - Northeast US
I am sure "recollection" is the correct word. It fits perfectly. "Recommendation" does not make a meaningful sentence.

El Paso, TX (raised PA, ex New Yorker)
English USA
I agree with aint and doji. It has to be recollection. (memory of)

And I have no recollection of that is a set legal phrase used when people have to testify to tell the truth under oath, or could possibly be later called to do so, in legal/criminal circumstances.

(That way, they can't face perjury charges of lying if it later turns out that they were involved. They'll simply say that at the time they were first asked, they simply had not remembered.)

Turkish
He definitely says "recommendation". I guess the actor or the scriptwriter was somewhat confused.

Inspired, possibly by Grougho Marx's famous - I resemble that remark (deliberate alteration from I resent, for humour) 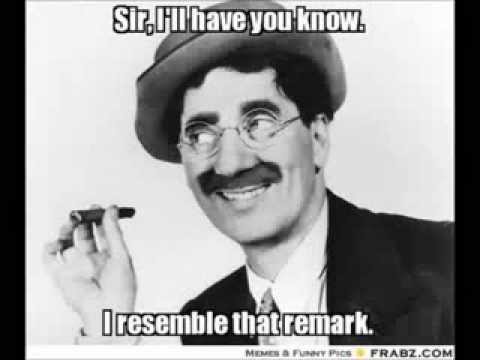