Mandarin
Is there a nuance between "incumbent President" and "current President"? Is the former a more formal expression than the latter?

**************************
Powell has faced substantial and repeated criticism from current President Donald Trump,[37] who has stated that he considers Powell an "enemy"[6] equivalent to or worse than China's leader Xi Jinping.[38] He has additionally stated that Powell has a "horrendous lack of vision"[39] and "I disagree with him entirely".

Cumbria, UK
British English
"Incumbent" does not mean "current". It means the person who occupies a position, which may be now or may be at some time in the past, and is usually used when the position has already been identified. So, when talking about the president of the United States, you might mention the current incumbent, Donald Trump, or the previous incumbent, Barack Obama.

Uncle Jack said:
"Incumbent" does not mean "current". It means the person who occupies a position, which may be now or may be at some time in the past, and is usually used when the position has already been identified. So, when talking about the president of the United States, you might mention the current incumbent, Donald Trump, or the previous incumbent, Barack Obama.
Click to expand...

But our dictionary appears to state otherwise:

Serbia
Serbo-Croatian
There is a slight difference in meaning when incumbent is used as a noun, as Uncle Jack has used it, and when used as an attributive adjective, when according to the Oxford Dictionary it means currently holding office.
The American Heritage Dictionary agrees with the Oxford: currently holding a specified office: the incumbent mayor
As for the formality, incumbent certainly sounds more fancy-schmancy.

Cumbria, UK
British English
I looked up use of the adjective in OED, since it usually means something quite different (something pressing on something else, or an obligation). The definition you mention is in there, but only has three quotes, all from the early 1970s and all, rather surprisingly, from scientific journals, and one of those is a figurative or jocular use. This is the definition:

Occupying or having the tenure of any post or position.​
I don't think it has ever entered mainstream usage.

English - U.S.
I think they are essentially identical in American English but not necessarily interchangeable everywhere in use.

As an example, in U.S. terminology, all people who have served as a senator are addressed as Senator for the rest of their life, when being addressed in a political context - unless they have attained a higher office than that, and there aren't many of those.

So during a political show, if a number of current and former senators are sitting around the table, the news person will address them all as senator. So there could be two senators from Tennessee there, one who served ten years ago and one who is currently in office. The one in office would be the incumbent senator. (Each state has two, so there is actually a second serving senator. They are distinguished by one being referred to as the senior senator and one is the junior senator.)

Challengers during elections are always trying to unseat the incumbent (in that office).

I don't think incumbent would be used in this context. It doesn't sound right even though it has the same essential meaning.

After writing all this, I think the main difference in use is whether the discussion is related to elections and the election process. That's the kind of context where incumbent would be used. That's not the case in the OP.

Added:
Here's a sample ballot from Georgia. You can see some names have the designation "(Incumbent)" beneath them. That indicates they are the current officeholder for that office. 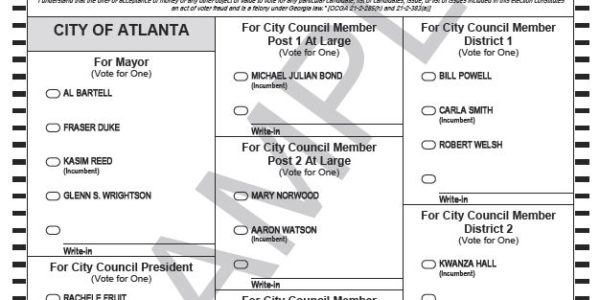 Mandarin
I appreciate the nuance.