Beijing
Chinese
In The Cat in the Hat Knows A Lot About That, a frog introduces itself saying "I'm a leaf litter frog". I'm not exactly sure what "leaf litter" is. Is it leaves that have fallen from the tree, and gather on the ground? If so, are they freshly fallen leaves or leaves that have been on the ground for some time and have turned yellow or dry?

South East England
English - England
A Wiki page here says "Litterfall, plant litter, leaf litter, tree litter, soil litter, or duff, is dead plant material, such as leaves, bark, needles, and twigs, that have fallen to the ground. This detritus or dead organic material and its constituent nutrients are added to the top layer of soil, commonly known as the litter layer or O horizon ("O" for "organic")"

EdwinT said:
In The Cat in the Hat Knows A Lot About That, a frog introduces itself saying "I'm a leaf litter frog". I'm not exactly sure what "leaf litter" is. Is it leaves that have fallen from the tree, and gather on the ground? If so, are they freshly fallen leaves or leaves that have been on the ground for some time and have turned yellow or dry?
Click to expand...

If it is an educational story, the frog probably joins the story so they can talk about "leaf litter". I would expect that some of the sentences following this sentence will explain it.

If there is no further explanation, the meaning is odd. The phrase "leaf litter" means "litter consisting of leaves (leaves that have fallen off the trees and are lying on the ground)". But to call fallen leaves "litter" is unusual, and is very judgemental.

"Litter" is a very negative term meaning "things that are carelessly thrown on the street, which should have been put into trash cans instead". Normally "litter" means things like cigarette butts and used food containers, seen on the edge of highways. Before around 1960 this was very common. From that time until now there have been organized efforts to clean up the highways (remove the "litter") and efforts to teach people not to "litter" (a verb meaning to throw things out your car window, when you should put them in trash cans instead).

What is odd is that leaves fall naturally: it isn't reasonable to say that trees are "littering". So when do leaves on the ground become "litter"?

If I was watching a children's show and a frog introduced itself as a "leaf litter frog", I would expect the next part of the show to be a moralistic lesson "teaching" children to clean up leaves, rather than leaving them on the ground.

Greece
British English (Sussex)
I'm familiar with the usage quoted in #2 by heypresto, so for me it doesn't seem at all derogatory. I suppose the frog likes to live or hang out under damp and rotting leaves and other debris under the trees. Lots of tasty insects in under there too; it sounds like an ideal environment if you're a frog - perhaps at certain times of the year when pools and ponds have dried up.

Northern California
English, USA
Oddly enough, "leaf litter frog" gets a number of hits on Google. I've never heard the term(s) before but there are tree frogs around here that never get near a body of water.

South East England
English - England
It seems that are numerous species of leaf litter frogs around the world. Amongst them is this cute little fellow: 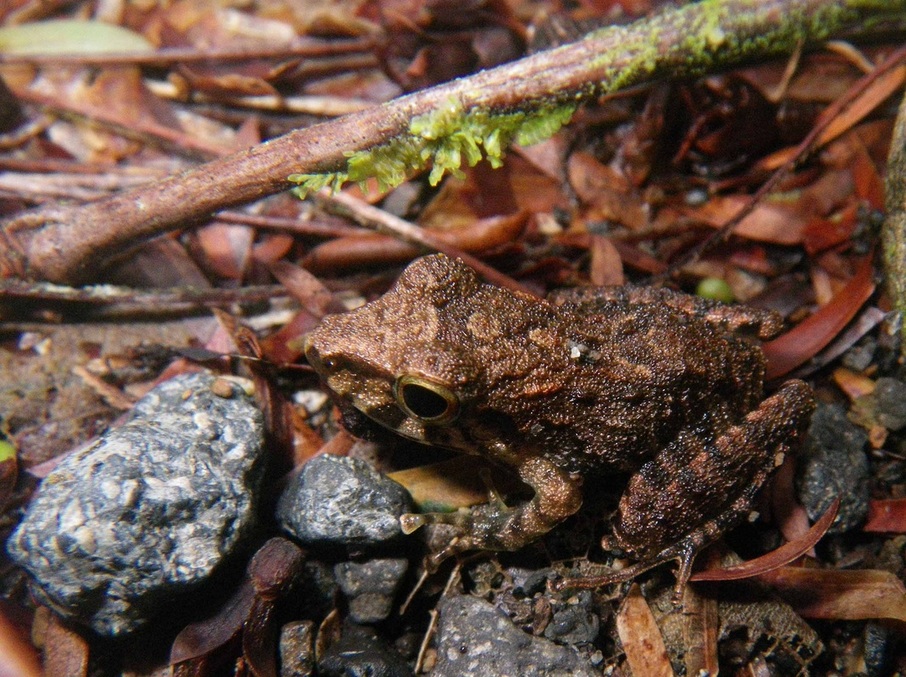 Cheshire
English / England
Aw, thanks, I was hoping someone would bring a picture in!

I don't think "litter" has a negative connotation when referring to leaf debris, it is just the word for the organic material -- and obviously just the home for these creatures.

I just had a quick look at the OED and found that "litter" has a meaning of straw / rushes etc used as bedding dating back to the 15thC, coming to us from the French word "lit" for bed. We can imagine how this has moved over time to our modern use of litter for all sorts of debris, but the leaf litter frog is still getting value out of the older meaning!
You must log in or register to reply here.
< Previous | Next >
Share:
Facebook Twitter Reddit WhatsApp Email Link
Top