Iran
Farsi-persian
Hi,
I'm reading the screenplay of the film The Departed, by the screenwriter William Monahan. In a scene, Castello, the mob boss, is trading something with some chinese gangsters. there is translator who tells Castello that at least two of Chinese gangsters have Machine guns and then:

COSTELLO takes it all in. The CHINESE GANGSTER looks like a Malay pirate. Costello’s gunmen are perched above, automatic weapons trained on the Triad.

Fresno CA
English - Northeast US
It is not an idiom. I don't know what a Malay pirate looks like.

But apparently the person writing the screenplay knows, and says that this character should look like that.

Oregon, USA
USA English
Piracy in the straits of Malacca has long been a problem.
I found this photo : 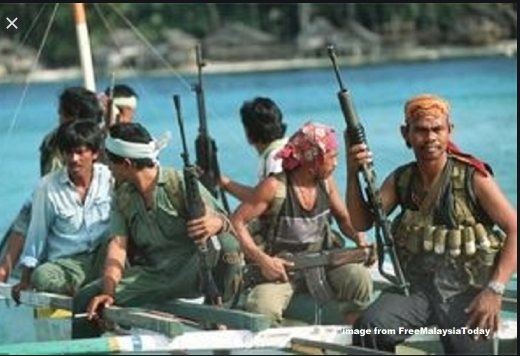 London
English - South-East England
The immediate image of 'pirate' is 18th-century Europeans with big beards and cutlasses. But for much of the 20th century the real pirate problem was in the Straits of Malacca, one of the busiest seaways in the world. They were as in the picture above - modern weapons, and dressed for the heat. It's not an idiom, but when a screenwriter writes it, they can expect the people working on a realistic crime picture to know that sort of image.

Fresno CA
English - Northeast US
That brings up a good question: what year does this play take place?