meeting with a small figure of Punch riding on a Dolphin

Korean-S.Korea
"The young lady who is responsible for these Sketches is now in her fifteenth year, and her first idea of Map Drawing is traceable to her meeting with a small figure of Punch riding on a Dolphin, and contrived to represent England. The thought occurred to her when seeking to amuse a brother confined to his bed by illness. "

Recently I found a wonderful caricature book from the 1860s (Geographical fun: being humourous outlines of various countries [cartographic material] : with an introduction and descriptive lines : Harvey, William, 1796-1873 : Free Download, Borrow, and Streaming : Internet Archive).
This sentence is the first line of the introduction of the book. I'd like to know what or who is Punch here.

USA / EEUU
English - US
Punch is a puppet character. See:

Punch and Judy is a traditional puppet show featuring Mr. Punch and his wife Judy. The performance consists of a sequence of short scenes, each depicting an interaction between two characters, most typically Mr. Punch and one other character who usually falls victim to Punch's slap stick. It is often associated with traditional British culture.
Click to expand... 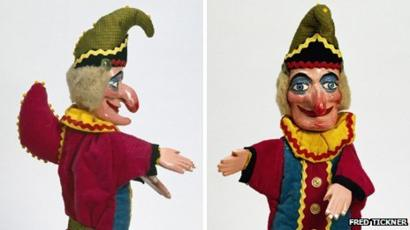