Republic of Korea Korean
Hello everyone. I would like to know what "my irregular lawn, well-shaved by Gatsby’s gardener" means in the following sentences:

I walked out the back way — just as Gatsby had when he had made his nervous circuit of the house half an hour before — and ran for a huge black knotted tree, whose massed leaves made a fabric against the rain. Once more it was pouring, and my irregular lawn, well-shaved by Gatsby’s gardener, abounded in small, muddy swamps and prehistoric marshes. There was nothing to look at from under the tree except Gatsby’s enormous house, so I stared at it, like Kant at his church steeple, for half an hour.

Gatsby finally met Daisy in Nick's house, after five years of devotion and waiting. During the meeting, Nick discreetly decided to take a walk around the house, even in the pouring rain, leaving two alone in his house. So he walked out the back way and, under the large tree, stared at Gatsby's house next door.

In this part, I could not understand how Nick's lawn was still irregular after being well-shaved by Gatsby's gardener.
Before the reunion with Daisy, Gatsby sent a gardener to shave Nick's lawn, and so his lawn was well shaved now.
But why is it still described as "irregular"...?

Greece
British English (Sussex)
"Irregular" means it wasn't laid out in an exact geometrical shape - as in a formal garden. It implies there was some imaginative landscaping involved.

Thank you very much for the explanation.
So it means that Nick's lawn was far from this:

but rather, close to this: 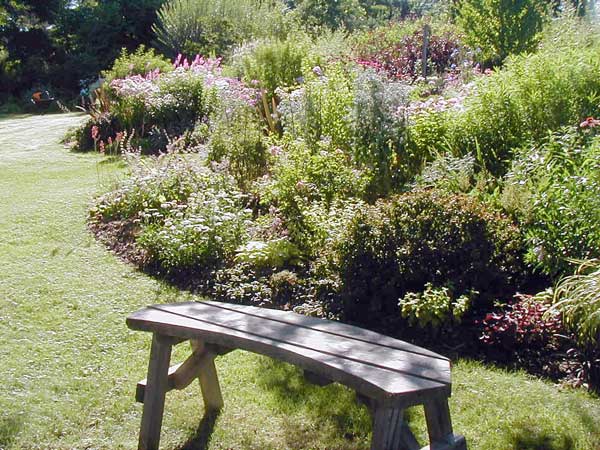 Now I got its meaning.
I sincerely appreciate your help.

Greece
British English (Sussex)
Something like that, though the small area of grass in the first picture probably doesn't qualify as "a lawn".

Thank you very much for the additional explanation.
Oh, now I see that Nick's lawn was not as regular as the picture you gave!
Now I think I got the concept.
I sincerely appreciate your help.
You must log in or register to reply here.
< Previous | Next >
Share:
Facebook Twitter Reddit WhatsApp Email Link
Top