In a teapot
English USA
What is the meaning and origin of Himachali धाम dhaam/Dogri taam? It seems to be like a Kashmiri wazvan feast. I looked at some Sanskrit meanings of धाम, like site of pilgrimage/abode/holy site/residence and I saw a few other unrelated meanings but none of them seem like good candidates for the etymology of this word. Also, is the word used in any other languages outside of the Pahari/JK regions to mean feast?
D

Germany
Bengali (India)
I think, this word is understood (not sure if actively used) in Indian Punjab, Haryana, Delhi, etc. in the sense of a (free) (consecrated) meal at a temple (sort of a Hindu equivalent to the Sikh langar). The word may well have originated in Dogri/Kangri/Pahari, because Hindus from the said region often make prilgimages to Vaishno Devi (Dogri speaking), Kangra Devi, Jwalamukhi (Kangri speaking), etc. but it has spread at least to this extreme northern part of the North Indian plains. If my memory serves me right, I was first introduced to the word in this sense in Delhi by a friend from Chandigarh.

In this context, I'd think it originally probably just meant having a meal at the "dhaam", i.e. the temple at the pilgrimage site. However, I don't know the exact modern signification of the word in Dogri/Pahari. The use of the word "dhaam" to mean (Hindu) pilgrimage sites is, of course, widespread, like the famous "chaar dhaam yaatraa" in Uttarakhand (Yamunotri, Gangotri, Kedarnath and Badrinath), or how "dhaam" is often appended to the names of the pilgrimage sites, like puri-(dhaam), etc.

Disclaimer: This answer is anecdotal, from my experience in North India. It may well be wrong due to sampling bias.
L

Hindi
Not an answer to your question, but do note that "dhaam" also means "destination" in Hindi.
D

Germany
Bengali (India)
For whatever it is worth, this online Dogri dictionary provides both "banquet" and "holy place" as meanings for धाम:
https://www.khandbahale.com/dogri-dictionary-translation-of-धाम 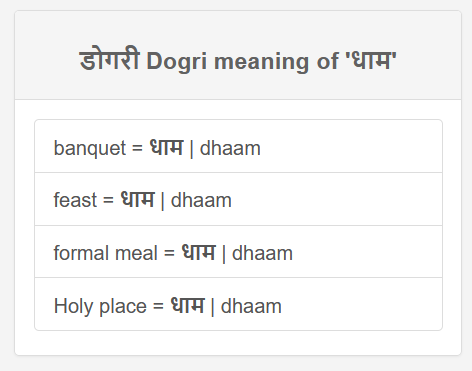