Below is the image. I think there is a spelling mistake. It would be گشته instead of کشته

What is the meaning of this entire couplet? 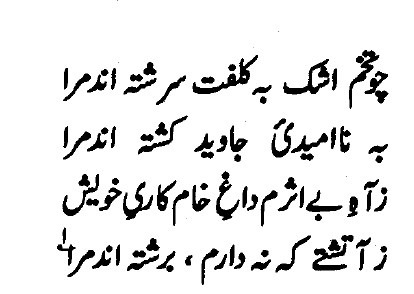 Germany
Bengali (India)
I was hoping someone qualified would reply. But nobody did. So, even though I am far from sure that I understand the verses, I'll still give it a try - at least to get the ball roling, if not to add anything of real value.

Anyway, hereon, I'll use the modern Iranian pronunciations to avoid any confusion. I think, the "tokhm" in the first line should be taken as "seed" and the verb in the second line is "keshte" (sowed) and neither koshte nor gashte, as it rhymes with sereshte (kneaded, blended, mixed) in the first and bereshte (fried) in the fourth line.

So, literally, the lines seem to be saying:
They have mixed me with hardship (kolfat) like a seed of tears.
They have sown me for eternal despair. [Continuing the "seed" of tears metaphor]
By/from my sigh without effect (...) blemish of own inexperience ... -> Not sure what's going on in this line exactly
They have fried me by the fire that I do not have. (I take it as "aateshi" - which fits the grammar, sense and metre).

From the fire-reference in the fourth line, I venture to interprete the third line to be hinting at something like:
(They have branded) my inexperience by my vain sigh.