I'm going to give personality to the months. So which one of the pronouns should be used in this way? Is it optional for the author or not?

September is coming with his/her colourful....?

English UK
Why are you going to personify the months, Sheila?
L

Salerno, Italy
UK English
If I were to personify a month it would be as a female.

Location: Mostly SW France
Native language: English (BrE)
I'd never thought about this before, but it seems to me that when we personify inanimate objects (or ideas) we always make them feminine. I can't think of a single example where I'd call something inanimate "he"; (maybe someone else can.)

[Edit]: I exclude dialect forms (such as Loob will be familiar with ), where 'e might be used — but then that's just a neuter pronoun, equivalent to "it": it has no real function of personification.

Actually in Persian we do it a lot, specially in literary writing, so even when I'm writing an English text, I'd like to make a personification too.
For example in Persian Literature, Winter usually is called Cold Grandma (maybe it is not exact in translation) and she has white hair which is made up of snow etc. : )
L

Sheila.S.A said:
For example in Persian Literature, Winter usually is called Cold Grandma (maybe it is not exact in translation) and she has white hair which is made up of snow etc. : )
Click to expand...

Sheila.S.A said:
Actually in Persian we do it a lot, specially in literary writing,
Click to expand...

It's not unknown in English either. For example, there's the Simon and Garfunkel song, April, Come She Will :

Persian-Iran
Right, thanks for the helpful answer.

So is it in the same way for the seasons too?
L

English UK
To be honest, unless you're writing a poem, I really wouldn't personify either months or seasons.

And if you are writing a poem, your choice will depend on the image you want to convey. In Wordsworth's Keats' To Autumn, for example, autumn is portrayed as a man.

Brittany, NW France
English (Midlands UK)
April, May and June are obviously female - doh! And I can't help but see November, February and March as mannish. But ultimately it's entirely subjective.

Loob said:
In Wordsworth's To Autumn, for example, autumn is portrayed as a man.
Click to expand...

Umm, that's Keats, Loob. And I can't see anything there that portrays Autumn as a man.

Wordsworth, on the other hand, wrote Thought on the Seasons, in which Spring (... Her loveliest and her last), Summer (... her parting hour) and Autumn (Before she hears the sound ...) are all feminine.

Coming back to your Keats link, though, reading it did make me realise that astral bodies can be masculine: "Close bosom-friend of the maturing sun; Conspiring with him ...".
Then there's "The sun has got his hat on ...", and the Man in the Moon. And if we personified the planets named after male gods (which is most of them), they'd have to be "he".


[Edit]: I've been thinking about that Keats poem. I suppose that if there were a comma after "sun", it would be possible to read it as the sun conspiring with Autumn. But given the semi-colon (Keats' own or an editor's?), and the general structure of the whole verse, I'm convinced that it means that Autumn is conspiring with the sun.

Wordsmyth said:
And I can't see anything there that portrays Autumn as a man.
Click to expand...

It's the whole of the second stanza, Ws: autumn as a farm worker.

UK
English - England
Back in Keats day, winter was "Old man winter" More recently, these images have softened and been replaced by women (PR, advertising, and the 20th century). The remaining male figure is "The Old Year" who is now infrequently seen as a elderly, thin gent with a scythe whilst the New Year (some Botticellian, cherubic example of androgyny) flits around.

Here are the seasons by Moucha: 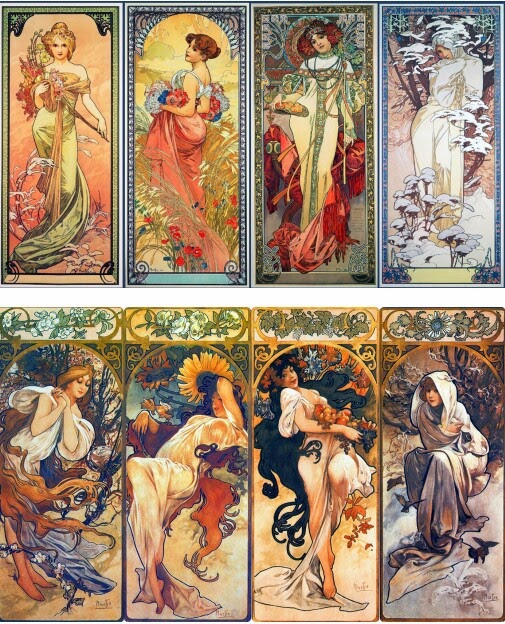 we have much to thank him for.

Loob said:
It's the whole of the second stanza, Ws: autumn as a farm worker.
Click to expand... 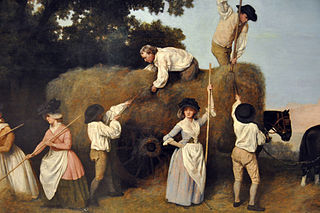 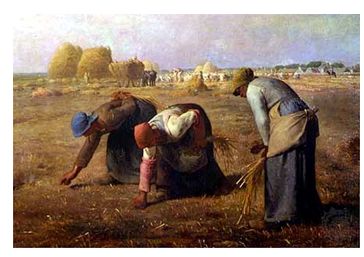 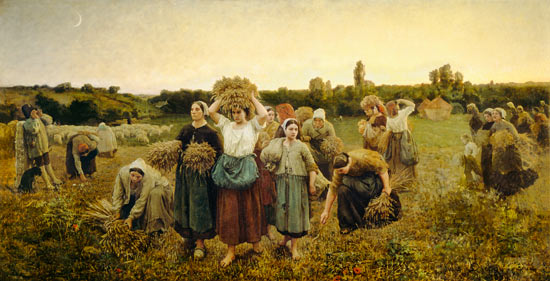 Mind you, I'm not sure how many women were opium smokers in those days: [lines 16-17] 'Or on a half-reap'd furrow sound asleep, Drowsed with the fume of poppies'.