Stand for one donkey

I do not understand what seems to be a joke in the following text.

It comes from childhood memories published in 1936 (and taking place at the end of the 19th century in an aristocratic family).
The episode here is about the "family prayers", which had to be endured everyday by everyone in the house, including the servants.

"The vision of that grave row of domestics sitting bolt upright on the benches opposite to me was irresistible. (...) on one occasion I scored a memorable triumph by laying on the place occupied by the butler a notice bearing the words 'Stand for one donkey.' This masterpiece of humour was successful in producing an explosion of muffled snorts (...)"

Any help would be great help : )

Have a nice day
G

Co. Leitrim, Ireland
English (UK)
I wonder whether “stand” is being used as a noun (WR dictionary definitions 30, 31 & 33). If so, perhaps the author is comparing the butler at prayers to a donkey in a stall.

A stand is a small area in or at which a form of transport waits for passengers to arrive (Bus stand; taxi stand, aircraft stand, etc.)

In the late 19th century in the UK, at small towns on the coast, the people would use donkeys to pull carts filled with fish and other goods that then would be delivered to customers in the area. The donkey owners and their carts would assemble at the "Donkey Stand" - a part of the road that was usually wider than the rest. The town authorities would put up a notice that limited the number of donkeys at any one stand.

At the same time, it became popular (for those families with money) to go to the seaside and donkey owners would make extra money by using the donkeys that were not pulling carts to give rides to children.

"A stand for one donkey" is therefore a small joke because whoever stood, sat or waited there would be thought of as a donkey - an insult. 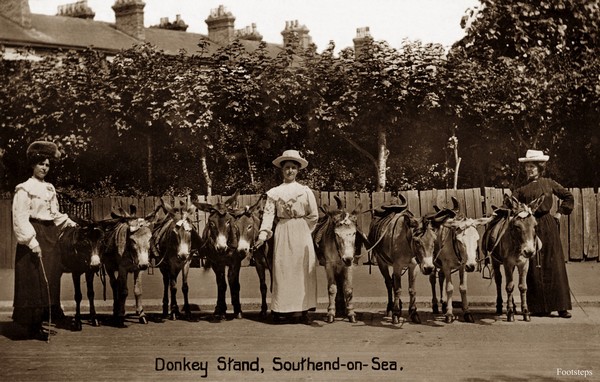 You didn't give the source of this sentence. It's towards the end of chapter 4 of First Childhood by Gerald Tyrwhitt-Wilson, 14th Baron Berners here: First Childhood, by Lord Berners
K

French
Thank you so much!

Thank you for clarifying this for me, and thank you for the great care you put in your answer.
I am glad to have learned all of that.