Lebanese
It plowed into them with a slowness that seemed implacable and somehow grand. Tommy Wannamaker swore in the Indian Head the next day that the taillights never flashed once. The Chevy just kept coming at a steady fifteen or so, like the pace car in the Tournament of Roses parade. The undercarriage screeched over the concrete island, and when the wheels hit it everyone but Stu saw the driver’s head swing limply and strike the windshield, starring the glass.
Source: The Stand by Stephen King
Context: This scene is taking place at Texaco station. The driver missed the lower entrance and bumped over the curb, plowing away the gas pumps in the upper island.

What does starring in starring the glass mean?

Penang
American English
When you hit a windshield, you get a starburst pattern. 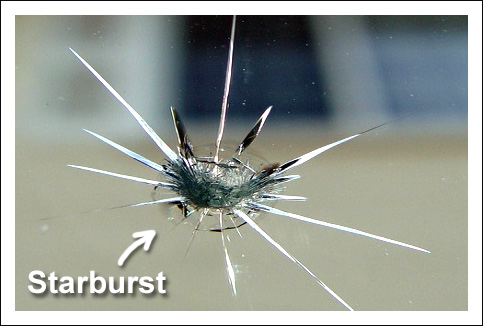 "Starring" is the verb form of creating this pattern ... at least for Stephen King.

Connecticut
English - US (Midwest)
Alistair MacLean mentions a "bullet-starred windscreen" in one of his books, so he appears to have thought it a legitimate verb.

English - U.S.
Is there a place to find out how to insert a picture? It has mystified me so far.
L

kentix said:
Is there a place to find out how to insert a picture? It has mystified me so far.
Click to expand...

Copy and paste. That's all I do.