Burgas, Bulgaria
Bulgarian
I read two sentences in a movie about pirates and ships in 18th century, which I cannot understand. The context around it is clear, but these two are totally independent and unclear to me. If it is of any help, in the situation described, the crew of a sailing ship is performing unusual and risky maneuver. The idea is to make the ship turn quick toward an approaching enemy ship, while almost driven ashore. They throw the starboard and then the stern anchor in the last moment, in order to make it stop quickly and then two lines of commands follow:

Surge the stern cable.
Surge the bow. Ready for impact.

miles away
English English
This might help for the first one, Ebulgarian:

5. Naut., etc.
a. intr. To slip back accidentally, as a rope or chain round a capstan, windlass, etc.; to slip round without moving onwards, as a wheel.
Click to expand...

I suppose it goes without saying that 99.999999% of native speakers watching that film wouldn't have the faintest idea what either of the orders meant.

(P.S. I've long suspected that a certain amount of nautical terminology used in such films is somewhat on the madey-uppy side. They could make the whole lot up and no-one would ever know)
F

..which makes sense in relation to the stern cable but I'm not sure about the reference to the bow

Burgas, Bulgaria
Bulgarian
Thanks, guys. It looks like I have missed this one: to slacken (a rope), which clears some of the fog. And now at least I have something to work with.

P.S.
If I understand correctly, the idea is to slacken both ropes in order to reduce the shock of the sudden stop. That's why the two commands are followed by Ready for impact.
Last edited: Mar 23, 2016

miles away
English English
That makes perfect sense now that you explain it, EB. Surge the bow might be shorthand for Surge the bow cable

Devon
British English
When you "surge" a rope you slacken it in a controlled manner. The control is achieved by friction between the rope and whatever it runs round - in this case presumably a capstan.

Indeed. (It's also possible there's a transcription error - it could equally be "surge the bower", referring to the anchor rather than its cable.)

Andygc said:
When you "surge" a rope you slacken it in a controlled manner. The control is achieved by friction between the rope and whatever it runs round - in this case presumably a capstan.
Indeed. (It's also possible there's a transcription error - it could equally be "surge the bower", referring to the anchor rather than its cable.)
Click to expand...

Both starboard and port anchors are at/on (I'm never certain about these) the bower.

Devon
British English
The bower anchor is the primary anchor. Modern ships have two, one on each side of the bow. On large sailing ships it was common to carry four, but normally only two would be attached to a cable. They are called "bowers" because they are carried at the bow. If you search Google Images for "HMS Victory" you'll find a good picture of bower anchors "catted" (hoisted up and secured) at the bow with the forward one each side attached to a cable.

USA, English
I Googled "bow rigging, tall ships". There were many examples here is one:

The rigging apparently counterbalanced the stresses put on the bow from the sail rigging.

I learned a long time ago that sailors are very fussy over terminolgy; ropes, lines and cables are all different things. Woe to you if you use the wrong word.

Devon
British English
I wasn't referring to the bowsprit rigging Packard. Now I'm not on my phone: 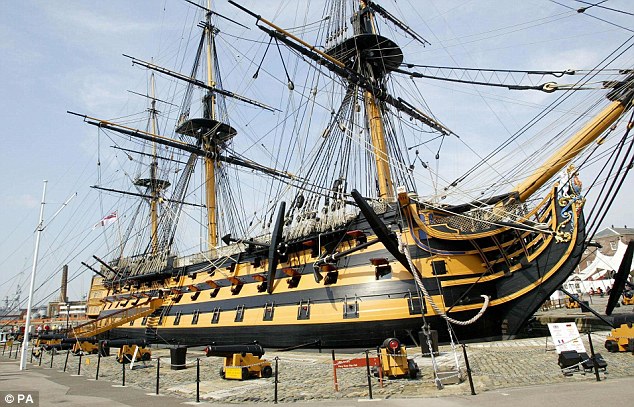 There's two more anchors catted on the port side - note the cable (bit of thick rope) coming from the hawse pipe in the bow to the anchor to which it is fastened.

Burgas, Bulgaria
Bulgarian
Useful info, thank you. I have just recently started my first nautical dictionary. It is quite an independent and unique cluster of knowledge.
You must log in or register to reply here.
< Previous | Next >
Share:
Facebook Twitter Reddit WhatsApp Email Link
Top