Spanish Andalusia
Hello,
I'm proofreading the Spanish translation of a Swedish film and I don't seem to find this word.
I'm also not sure if it's Swedish or Danish. Is this the correct spelling?

British English
The rest of the text is Danish, but this word seems to be a mixture. Oysters is østers in Danish and anchovies is ansjovis in Swedish. I searched for 'oyster anchovies' in English to see if that existed, but it doesn't seem to. Maybe the words should be separate: oysters and anchovies (?)

Spanish Andalusia
I thought it was either oyster anchovies or Eastern anchovies. I don't see why the English translator didn't solve this. If everybody spoke Nordic languages they wouldn't need subtitles.
Thank you serbianfan, I will just flag it so that they can correct it.
S

British English
"If everybody spoke Nordic languages..." Well, you should have welcomed the Vikings and offered them sangría when they came to Spain, instead of chasing them away, then you'd all be speaking Scandinavian today...

We welcomed everybody in Andalusia. People just came and stayed, Romans, Greeks, Arabs, Jews.
It was the Northerners that wanted to kick everybody out. *With tongue firmly in her cheek*
A

Spanish Andalusia
So öster means East and Östersjö is the Baltic Sea? That might be it. Thank you again.
R

Oslo, Norway
Norwegian
The Östersjö explanation is plausible, but I found another possibility: 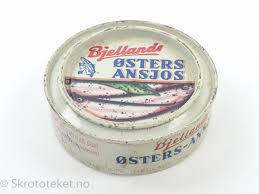 It does not exist today, but this is maybe from an old movie?

Spanish Andalusia
It is, yes. With a very young Max von Sydow.
Thank you raumar.
R

Oslo, Norway
Norwegian
I did some more googling, and discovered that there were "oyster anchovies" in Sweden as well. In Swedish it is "ostron ansjovis":
Carlotta - Objekt

So this must have been a general type of anchovies, not a specific brand name.
P

Denmark
Danish
It seems like "Østers-ansjos" has been used as a trade name of the more accessible sprats.
P

piccando said:
It seems like "Østers-ansjos" has been used as a trade name of the more accessible sprats.
Click to expand...

In Sweden, the product called "ansjovis" on the shop shelves, and which is an important ingredient in Janssons Frestelse, is based on the fish with the latin name Sprattus sprattus, and a certain mix of spices. It has quite a pungent flavour, and the texture is more like pickled herring than cooked fish. The stuff that you might find on a pizza or in your salade niçoise, is called "sardeller" in Swedish. And the tin marked "sardiner" on the shelf might contain almost any small fish, including Sprattus sprattus and actual sardines (Sardina something-or-other).
S

High German/Danish
Anything that would have to do with "Østersø" or "Östersjö" would be wrong because they don't live in the Baltic Sea. They live in the Atlantic, Mediterranean, and the Black Sea. Besides, what is known as the Euorpean Anchiovy is the species Engraulis encrasicolus

Sweish "sardeller" are probably the same - when I buy them in Germany I also have to look for "Sardellen". I have no idea what they would have to do with oysters. They are quite small, expensive, and their main function in cooking is simply to add taste. At least in Italian cooking. The smallest ones have such a strong tast thay you can hardly eat them solo.

According to Aftenposten Ansjosen er i boks the socalled "norsk ansjos" is actually a "brisling" - sprattus sprattus.

Why they call them "østers-ansjoser" is still not clear to me. Scandinavian cooking is not my cup of tea.
Last edited: Jan 24, 2021
W

Sepia said:
According to Aftenposten Ansjosen er i boks the socalled "norsk ansjos" is actually a "brisling" - sprattus sprattus.
Click to expand...

...and if you click on the link given by @raumar, it says they are "brisling" on the side of the can. But on the bottom it refers to the fish as "ansjos".

I was looking at the words for various small fish recently for another reason, and quickly concluded that there was a lot of confusion, between and within various countries. It seems very few people care about scientific species, and they are just marketed with names they think customers would understand.

In the UK, the John West brand sells tins labelled "brisling" and "sardines", and as far as I understand it they are basically the same thing, but "brisling" are a bit smaller. They also have "sild", which John West say are small herring. Wictionary says "sild" is "any young herring (other than a sprat), especially if canned and processed in Scandinavia for sale as a sardine" - so maybe "sardines" are sometimes "herring". In the UK, anchovies seem to be usually small brown canned fillets, which you put on pizza, but you can get white anchovies (cured differently), which are larger and not canned.
S

British English
Wow! Jasminasul, I bet you didn't expect so many replies. I think I almost have enough material now to do a PhD on this topic!

Spanish Andalusia
I was going to write that this is the thread that keeps on giving.
You crack me up serbianfan.
Thank you and thanks to all of you guys for your help.
A

Sepia said:
Anything that would have to do with "Østersø" or "Östersjö" would be wrong because they don't live in the Baltic Sea. They live in the Atlantic, Mediterranean, and the Black Sea. Besides, what is known as the Euorpean Anchiovy is the species Engraulis encrasicolus
Click to expand...

The fish called ansjovis in Sweden when it ends up in a tin is not the true anchovy, it's skarpsill, as others here have explained. The true anchovy is called sardell here. The skarpsill lives in the Baltic Sea, and it can be fished and turn into ansjovis now. Skarpsillen mår bra i Östersjön – nu kan du äta hållbar ansjovis. Eller?
S

High German/Danish
I hope you are all aware that this is only one of many cases where the fish that is sold as food is called something totally different than it biological name.
This seems to be legal although I cannot quite understand why. Maybe it is because it has been done for hundteds of years before thete were any consumer protevtion laws.

Spanish Andalusia
I've just heard back from the project manager. Apparently he's trying to read the menu in Danish and he's botching the pronunciation, to the mirth of his Danish-speaking date, but they could not translate this into English.
I have suggested: Ost... oest... 'oestranchiovis' or something like that.
And in Spanish: Ost... oest... 'oestranchiovis' o algo así.
Another solution could be using the phonetic transliteration of difficult French words, like: Be... Bo... 'Boof' Bourguignon.
You must log in or register to reply here.
Share:
Facebook Twitter Reddit WhatsApp Email Share Link
Top