near Paris
Français
I have a question about the expression حلّه يترك.

I think we can say it when, for example, you invited your boss to your house, but he stayed way too long. Finally, you manage to take him out of your house and you say to your wife حلّه يترك i.e., he left.

But imagine if someone is in your house, and you ask your wife to come in the kitchen, can you tell her quietly حلّه يترك ? i.e. it's time for him to leave, we must take him out as soon as possible.
Last edited: Apr 28, 2018

You can use the expression in both contexts, but it's حللو, not حللك. Also, I would use يرُوح or يرَوِّح or ينقلع (which is much stronger, like "get the hell out of here") - not يترك.

elroy said:
You can use the expression in both contexts, but it's حللو, not حللك.
Click to expand...

Yes, of course!
In fact, I wrote حلك تترك first, then I changed my mind and I forgot to correct حلك...
I edited my post.


elroy said:
In the first scenario, it means "It was about time he left" (not "he left").
Click to expand...

Yes I just wrote he left in the sense that he left, and I'm really happy he finally did


elroy said:
Also, I would use يرُوح or يرَوِّح or ينقلع (which is much stronger, like "get the hell out of here") - not يترك.
Click to expand...

near Paris
Français
I discussed this expression with a Syrian friend, I asked her how she would say it was about time! I was so hungry, as for example, when you've been waiting for your food in a restaurant, and you finally see the waiter with the food you ordered coming.

Then, I thought the confusion was coming from the use of the verb جهز as in it was time they prepare the food, then yes, it makes no sense to say it if you see the waiter coming with the food.

So I told her what about حله يجيب الأكل، أنا ميت من الجوع but still, she told me that for her, it still means that the waiter did not come yet... So I don't get it

Syrian Arabic
in order to understand the meaning of حلّو يجهز الأكل , it might be helpful to distinguish between :
يِجْهَز = to be prepared
and يْجَهِّز = to prepare

for the food to be prepared , this indicates that it will be served very shortly after that...so يِجْهَز here is used in the sense of "to be served" not "to be prepared" 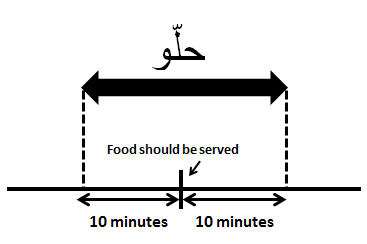 What is the vowel on the ح?

Chicago, IL
US English, Palestinian Arabic bilingual
It's "a" in Palestinian, and I think in Syrian too.
H

lukebeadgcf said:
What is the vowel on the ح?
Click to expand...

I would say that it's a contraction of حان له in particular (not آن), otherwise, where would the حاء have come from?
H

Mahaodeh said:
I would say that it's a contraction of حان له in particular (not آن), otherwise, where would the حاء have come from?
Click to expand...

My dear, حان and آن have the same meaning.
M

London, UK
Arabic, PA and IA.
I'm not talking about the meaning, I'm talking about the phonetic construction. If it were آن له then it would not become حلّه, it would probably become ألّه.
You must log in or register to reply here.
Share:
Facebook Twitter Reddit WhatsApp Email Share Link
Top