chinese
Hi,
Here are some words from the novel Lady Chatterley's Lover(para. 81, chapter 11) by Lawrence(the University of Adelaide,here):
A turn, and they ran on the high level to Stacks Gate. Stacks Gate, as seen from the highroad, was just a huge and gorgeous new hotel, the Coningsby Arms, standing red and white and gilt in barbarous isolation off the road. But if you looked, you saw on the left rows of handsome ‘modern’ dwellings, set down like a game of dominoes, with spaces and gardens, a queer game of dominoes that some weird ‘masters’ were playing on the surprised earth.

I feel Coningsby Arms refers to the gorgeous new hotel, and standing red and white. But what are the meanings of Arms and in barbarous isolation please?
Thank you in advance
Last edited: Mar 16, 2016
B

Tamil
This thread should answer your question on the meaning of "Arms": Why are apartment buildings called "Arms"? (The thread refers to inns as well.)

"In isolation" means that the building was comparatively isolated. There weren't any others close to it.

It's a little difficult to explain the word "barbarous" in this context - I suppose it's a reference to the fact that barbarians didn't give as much importance to society as more "civilised" people, and therefore led more isolated lives.
S

Edinburgh
UK English
I think 'barbarous' is an aesthetic judgement - the person whose thoughts are described in the text does not like modern things.
B

Tamil
He also calls it gorgeous, earlier in the sentence.
S

Edinburgh
UK English
I don't think 'gorgeous' is intended as a compliment in this case. It's vulgar and showy.

Greece
British English (Sussex)
I agree with Szkot about the "aesthetic judgement". For whichever reason Connie or DHL considered it barbarous, it was a subjective judgement. I don't think "gorgeous" implies approval here, Barque:

I think the dictionary meaning you quote doesn't have any negative connotation on its own, Veli, though you are probably right otherwise. The author's enclosing the word 'modern' in the following sentence in inverted commas intimates his taking it negatively, I think.

Greece
British English (Sussex)
The dictionary definition is neutral - it shows that "gorgeous" doesn't have to be understood as "beautiful".
L

chinese
Thank you a lot. Now I conclude that the hotel was called Coningsby Arms because there was a coat of arms on its sign painted on its wall.
Last edited: Mar 17, 2016
B

longxianchen said:
Now I conclude that the hotel was called Coningsby Arms because there wa a coat of arms on its sign painted on its wall.
Click to expand...

I'm not sure that has to be the case. There may have been a coat of arms of a family called Coningsby on its wall but the impression I get is that "Arms" had become a word commonly used in the names of such establishments. Just an impression - I don't know for certain.


velisarius said:
The dictionary definition is neutral - it shows that "gorgeous" doesn't have to be understood as "beautiful".
Click to expand...

I wouldn't normally disagree with you, Velisarius, but I'm surprised to hear you say the definition is neutral. Aren't "splendid", "sumptuous" and "magnificent" all terms of praise, or at least approval?

Also, two paragraphs later, I found this line: "The hotel in actuality was nothing but a miners’ pub though it looked first-classy."

longxianchen said:
Thank you a lot. Now I conclude that the hotel was called Coningsby Arms because there wa a coat of arms on its sign painted on its wall.
Click to expand...

Almost correct. The 'arms' would be painted on a sign that hung from the wall.

"The XYZ Arms" is a very common form of name for a pub or hotel in the UK. 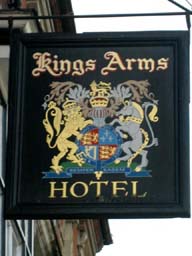 Barque said:
but the impression I get is that "Arms" had become a word commonly used in the names of such establishments. Some one from the UK might want to comment.
Click to expand...

It is common, but it's only part of the name of a pub or hotel if it refers to a coat of arms.

Greece
British English (Sussex)
I think that in this context the purely descriptive dictionary entry is the one to go for, rather than the one that gives the more familiar meaning of "beautiful". The new hotel is "splendid", "sumptuous", and "magnificent", [and that would appeal to a lot of people]. Whether the writer means us to understand "beautiful" when "gorgeous" is applied to a new hotel in a possibly unsuitable setting (from Connie's point of view) is debatable, I think.

Compare with this (from 1903), where the speaker is obviously disapproving:
[The saloon on a yacht] looked — well, horribly gorgeous — you know what I mean, plush lounges, silk cushions. and that sort of thing
The Riddle of the Sands

It looked "first-classy"—the sumptuousness sounds at best pretentious in these surroundings and for this clientele.
L

chinese
Thank you so much
B

Tamil
Thanks for your replies, Andy and Velisarius.


velisarius said:
Whether the writer means us to understand "beautiful" when "gorgeous" is applied to a new hotel in a possibly unsuitable setting (from Connie's point of view) is debatable,
Click to expand...

I haven't read the book, so I don't know what Connie's point of view is, but I think I've got a fair idea of the plot from Long's threads!
Last edited: Mar 17, 2016
You must log in or register to reply here.
< Previous | Next >
Share:
Facebook Twitter Reddit WhatsApp Email Link
Top