One of "to tackle" definitions:

Cumbria, UK
British English
"Tackle" gives no clue to the outcome, but other parts of the sentence might. In sentence (1), the addition of "tried to" very strongly suggests that the attempt to escape was unsuccessful. Without any other information, the inference is that the police officer managed to detain him. There aren't any clues in (2) so we cannot tell either way.

Oregon, USA
USA English
To me (and using American football as a guide), I would use "tackle" to mean "thrown to the ground"
in this context.

London
British English
In a textual account, I would expect to be informed of the success of the 'tackle' before reading these sentences. Something like "A masked intruder was arrested ... . He had been tackled by police as he tried to escape ... "
When I read 'tackled', I too imagine a physical engagement, like a rugger tackle (the British ball game rugby). The police officer stopped the burglar escaping by throwing themself on him, grabbing hold of his leg or legs. 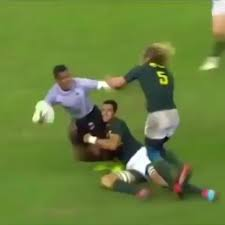 Fresno CA
English - Northeast US
Note: this is different from the metaphorical meaning "to start working on".

In this meaning, "tackle" is a sports term, which means "physical grab and wrestle to the ground". It means to take someone who is standing up and force them to lie down.

It does not mean "to fight". In American football and in soccer, players "tackle" opponents constantly, but they are not allowed to fight.

This common sports action can be used in other situations:
- A policeman may tackle (grab and wrestle to the ground) a criminal that the policeman is chasing.
- Friends (especially children) often tackle friends, as part of rough playing.
- The wrestler tried to tackle his opponent.


loviii said:
we can only say that the police officer fought him and we don't know the result?
Click to expand...

The "tackle" is only a brief action ("take down" or "wrestle to the ground"). We know the result: he is on the ground. We don't know what happens after that. If this is part of a fight, we don't know all the other things that happen in the fight, or the result of the fight.

Cumbria, UK
British English
In BrE, I would not have said that "tackle" automatically suggests wrestling to the ground, and that the meaning is more "grapple with" than "bring down". However, in either case, there is nothing within the word to say whether the person tackled eventually escaped or not.
You must log in or register to reply here.
< Previous | Next >
Share:
Facebook Twitter Reddit WhatsApp Email Link
Top