English - Britain
I Believe that this is a makers mark.
It is set into the blade of a Laz sword.
I have increased the size to make them clearer.
Can anyone tell me what these characters say please? 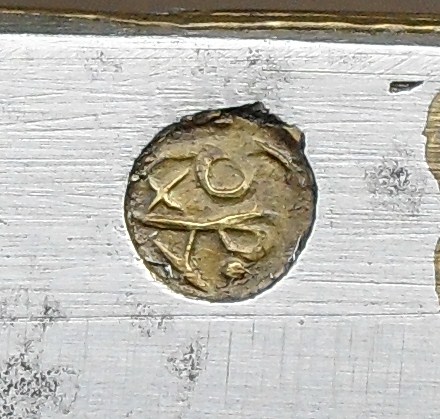 Budapest, Hungary
Hungarian
If the sword is from an area where the Georgian alphabet was used, the two characters may be old versions of two Georgian letters: initials, perhaps.
I know the modern Georgian alphabet, but I can't recognize the letters.

My other idea is that your picture needs to be viewed upside down, in which case the inscription is in the Arabic script (which I don't know at all), most Laz being Muslim.
A

It's a real shame. This is a very interesting region specific sword and I'd love to know the maker's name.

Thank you for your help.
It's a sword exclusively associated with the Laz.
They are so unusual that it seems unlikely that they were produced outside of the Laz community as some of their other equipment was.
Last edited by a moderator: May 23, 2018

Atlantia said:
This is a very interesting region specific sword and I'd love to know the maker's name.
Click to expand...

The characters are probably letters, not words, so I don't expect anyone to be able to "translate" them.
I know nothing about Laz sword-making practices but are you sure it's a maker's mark?
Last edited: May 22, 2018
A

These swords are rare, and a percentage of them have these inset cartouches.
The Laz also wore Qama/Kindjal and other more traditionally Ottoman weapons.
These marks are consistant with other makers marks from that region on Ottoman weapons and would have been placed to identify the swordsmith.
As you say, they seem like single or dual characters. The cartouche is very small, less than 1cm across.
Last edited: May 22, 2018
You must log in or register to reply here.
Share:
Facebook Twitter Reddit WhatsApp Email Share Link
Top