What will happen when Fidel Castro dies?

ESPAÑOL México
Hi! Do you have some personal prediction about what will happen with Cuba when Fidel Castro dies? I think that his dead will occur before 2010 year, after that what will happen?

Belo Horizonte, BRASIL
Português/ Brasil
As a very laic person I'd say that the very next day after the funeral
Cubans will try to recuperate the time they were apart from the rest
of the world as it is nowadays _ good or bad, it doesn't mind - just to
be "in the same boat" (I don't know the English expression for that)
with other nations. As a foreigner , not even of Spanish origin, it's
just a feeling.
L

Kansas City, KS,USA
Cuba:Español,English,Magyarul,Svenska
I am not so sure, Vanda, for the last ten years Castro has been building a group of leaders that are now ready to take over and create a slow, very slow transition period for Cuba integration. The biggest factor in that process is CHina. REmember that Cuba always shifting between the ex-Soviet Union and China and they have pretty strong ties to China. Now China is creating the strongest economy of the century. As you know even the United States in a tremendous debt with them, so Cuba will have again a super strong friend to hide behind and the Americans will again run into a wall (in this case the Chinese Wall) when trying to open Cuba to the west. I think that even in death Castor will manage to make a number on the United States.
L

Kansas City, KS,USA
Cuba:Español,English,Magyarul,Svenska
I would like to see a multi party system and some kind of free election, I also would like to see a cooperation betwee people at the Island and the huge number of emigrants around the World. It will be difficult because there is a lot of bad blood around but it should be the first best step. Castro out by 2010? He may be like Mao, kind of eternal and as wrong with his cult of personality as Mao was. By the way, Castro was always talking in the past about how wrong Mao was keeping power when he was so sick. Now he is doing exactly the same thing.
E

Reili said:
I think that his dead will occur before 2010 year, after that what will happen?
Click to expand...

Is this wishful thinking or a prophecy? Fidel has survived too many US presidents, too many coups, too many assassination attempts, etc. etc. He's going nowhere so let's plan things with Fidel around and not gone. It's more realistic. Otherwise, we'll be wasting precious time and bandwith...
R

Everness said:
Is this wishful thinking or a prophecy? Fidel has survived too many US presidents, too many coups, too many assassination attempts, etc. etc. He's going nowhere so let's plan things with Fidel around and not gone. It's more realistic. Otherwise, we'll be wasting precious time and bandwith...
Click to expand...

Thanks a lot for your participation, you've got very interesting comments and of course I've expressed a personal prophecy... he looks too bad like if he have got Parkison.

Phil
Philippines-English, tagalog, spanish, chavacano, tausog, visaya, ilonggo.
i THINK Cuba will be on Democracy..everybody goes to Democracy when a hard communist leader dies. In addition, It would not be easy, a struggle I see in the near future.
A

Upstate NY, USA
Mexico, Spanish
But he will eventually die.


Just for the purpose of the question, I think that Cuba will be in the middle of the following forces:

1.- Castro's followers (with power) fighting to each other to be the next person in charge
2.- International forces, mostly from Florida (US), trying to "rescue" Cuba from "Comunism"
3.- Cuban dissidents who want to get more political and economical power.
4.- His party (and government) that will try to control things the way they have done in the past.

Which force will win? I do not know, but I think Cubans will suffer the consequences. Possibles outcomes: similar to Yugoslavia after Tito, it may be like russia (but being poor since the benining).


Everness said:
Is this wishful thinking or a prophecy? Fidel has survived too many US presidents, too many coups, too many assassination attempts, etc. etc. He's going nowhere so let's plan things with Fidel around and not gone. It's more realistic. Otherwise, we'll be wasting precious time and bandwith...
Click to expand...

Upstate NY, USA
Mexico, Spanish
I am sorry, I disagree. Maybe you are right and I am wrong. Could you provide examples?


rob.returns said:
i THINK Cuba will be on Democracy..everybody goes to Democracy when a hard communist leader dies. In addition, It would not be easy, a struggle I see in the near future.
Click to expand...

The question “what will happen to Cuba once Fidel dies? and the several answers that implicitly conclude an either gradual, virtual, up to a radical change in the political composition of the country are predicated on several assumptions, which may or may not be false; but which at this time fall under the category of “Unk-Unks (unknown-unknowns). First of all, it accepts at face value that there is widespread dissatisfaction of Cubans within Cuba of the present political arrangement. At the same time it fails to acknowledge that Cuba has been, since the early sixties, subject to severe economic sanctions and pressures from the US and several of its allies, motivated or pushed by right wing exile Cubans centered in Miami. One premise not recognized is that that situation alone has permitted the Cuban society to harden, cope with adversity, and maintain internal coherence and stability in front of that adversity. Fidel dies, and those within the system will keep the system running as if he were alive, because a change in the system will require a radical change in how the US perceives Cuba.

Here enters the second assumption. The death of Fidel will generate a massive outpouring of emotion in Miami, where exile Cubans, whipped into a frenzy by right wing exile leadership will dance in the streets and convince themselves it is just a matter of taking a boat back across the Florida Keys and retake or re-start where they left off in ‘59. They will forget that those that stayed will see this exile leadership as the cause of the embargo and every malady and suffering suffered by those on the island for over 45 years. Any effort to return, by those in exile will be met with the strongest opposition, if not outright violence.

Any change in the government will be very gradual, if at all, and based on reciprocal changes from the US government; as someone else observed, Mao died in China and the Chinese Communist Party is still in power and in absolute control of that country. In other words, Bush, Jr. and Jeb, plus the neo-cons will have to ease up and ignore that very powerful and financially influential right wing Cuban exile block before any real change occurs in Cuba. And before that happens we’ll have to see Iraqis waving American flags and singing the National Anthem down the streets of Baghdad…

Reili said:
Hi! Do you have some personal prediction about what will happen with Cuba when Fidel Castro dies? I think that his dead will occur before 2010 year, after that what will happen?
Click to expand...

It's 2016 and he is still alive and kicking. But the changes have begun.
I

Czech
I hope that the railway in Cuba, after the fall of the Castro's regime, won't end up so tragically like in other Latin American countries.

Pugnator said:
R.I.P. He indeed was a great man!
Click to expand...

I don't know if you are joking or not.
P

Warped said:
I don't know if you are joking or not.
Click to expand...

I'm not joking at all. Here in Naples he is very beloved, we have also already did a Presepe's statue in his honor. 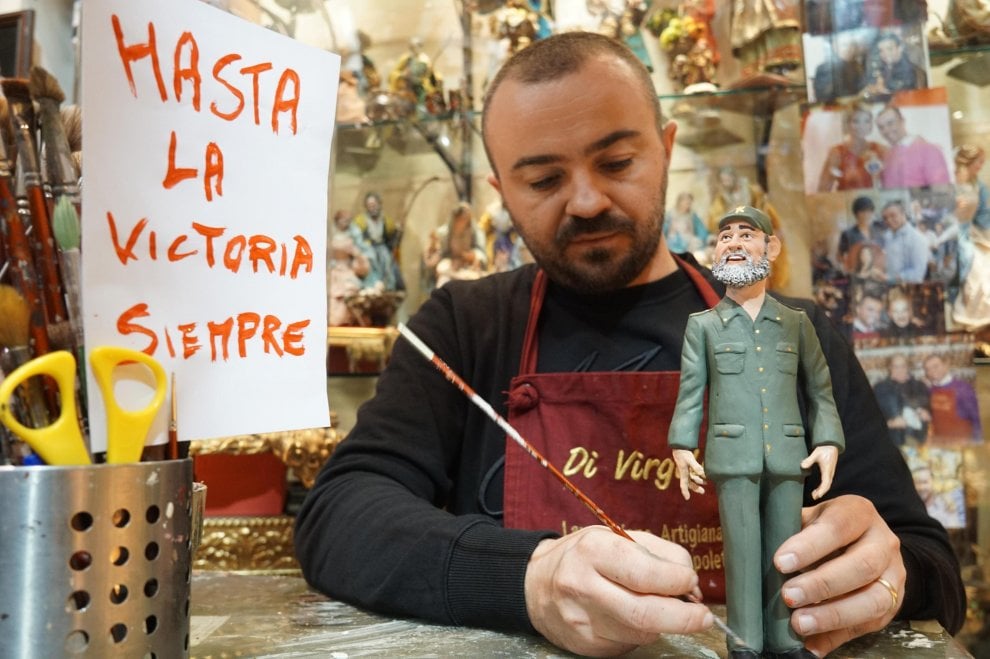 Finnish, Swedish
Ah, then. I see he is liked in some parts of the world and among certain people.
P

Neapoilitan (Naples) / Italian (Italy)
Even our mayor kinda praised it, in my city are also planned some manifestation to show our respect toward him.

Warped said:
I don't know if you are joking or not.
Click to expand...

No way; even in my country there are people who loved him.
The opinions are divided of course.

Português - Brasil
Now back to the point.
He was still living and the changes started. Now he is dead.
What do you believe it will happen now? More Raul and less Fidel? Less Castros' regime and more contact with the rest of the world? Will the lack of the symbol weaken the regime, in your opinion?
Shall we add to the recipe the apparent will of President Obama's towards a "more normal" relationship and / or Trump's bias about the theme?

Greater London (UK)
English + French - UK
So far, because his elderly brother is still at the helm, and basically the one-party Communist State is still in place, no, nothing much has happened... Wait and see. You would need the old guard to move aside and new leadership to emerge, who wouldn't be a carbon copy of Fidel et al. And of course it depends on the relationship with the USA: maybe Raul ought to give The Donald a call...
X

Greater London (UK)
English + French - UK
So long as Donald Trump is in the White House, in terms of US/Cuban relations, not much will happen, I suppose. Internally, in Cuba, I don't know but I don't get the impression that much has changed. When a powerful structure is entrenched, built around a one-party State structure, it's not the people who matter but the structure becomes the Big Beast: people die and the structure stays. See Zimbabwe, North Korea, mainland China, Venezuela... In the case of the USSR, the man at the top decided to change things and the structure collapsed. It was different.
S

Spanish/English
That murderous spawn of Satan has, thankfully, been dead for almost 4 years now and things remain the same!
With or without President Donald Trump, NOTHING will happen in Cuba. There has been no internal change. On the contrary, Díaz Canel is just as vicious as those murderous wretches, the Castros. Nothing will change.
You must log in or register to reply here.
< Previous | Next >
Share:
Facebook Twitter Reddit WhatsApp Email Link
Top