English-USA
Hi,
So I am attempting to cite a Yiddish poem found in a Yiddish book that was scanned and put online in a database. I've decided to include the original Yiddish (in Hebrew characters) and a translation of the title, publisher, etc.

I can't find either פאלשׁטענדיגע or אויסנאבּע in any dictionary, but google translate is giving me "false exits" which makes no sense.
Here is the title page: 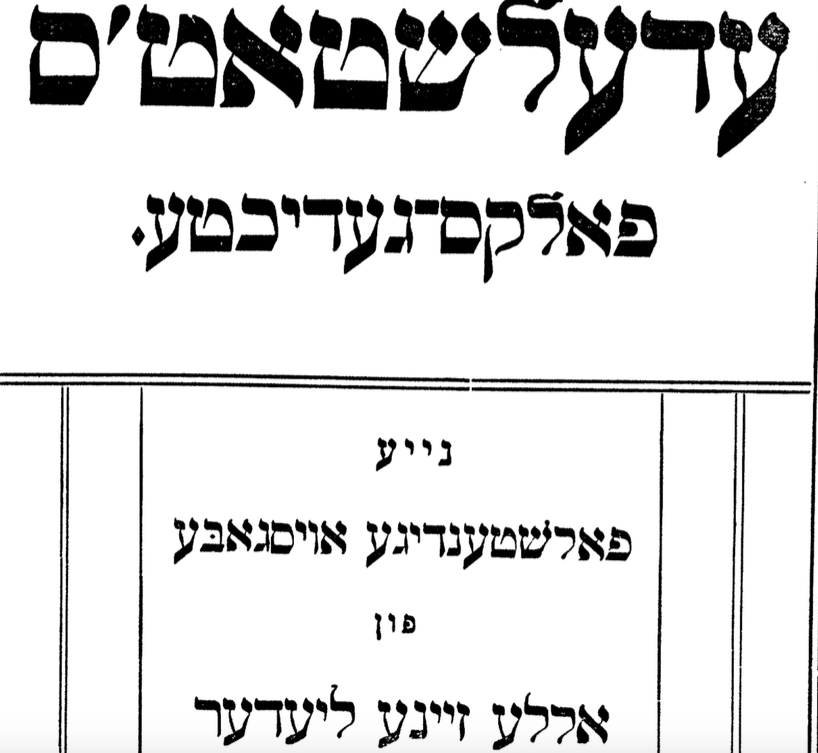 Any advice would be greatly appreciated!
L

English-USA
Alright, with some research, and some fiddling with letters, I think I've got "understanding" and "exit." Perhaps this could mean in this case, notes and afterword/post-script?

Chicago
Spanish - Uruguay
'output' or 'issue', for 'oysgabe'
It sounds like it's German Yiddish.
F

Chicago
Spanish - Uruguay
So it is German Yiddish! at least the spelling of 'alle' which doesn't have a double l in Yiddish.
L

English-USA
Thanks all! It's interesting-I was having better success just transliterating and translating from German, despite the fact that the poet was born in Russia!

duvija said:
So it is German Yiddish! at least the spelling of 'alle' which doesn't have a double l in Yiddish.
Click to expand...

It used to be relativey common to Germanize the spelling of Yiddish. That has nothing to do with "German Yiddish", only with the spelling.

It says "naye folshtendige oysgabe fun ale zayne lider". The two words "folshtendig" and "oysgabe" are borrowings from German, which was relatively common as well. אויסגאַבע (oysgabe), and the more Yiddishized spelling פֿולשטענדיק (fulshtendik) do appear in my Yiddish dictionary.
Last edited by a moderator: Oct 1, 2017

Chicago
Spanish - Uruguay
But this is 'falshtendike' or 'farshtendike'. Strange that an 'u' would be spelled as 'a'. I assume it was spoken by 'yekes' so it would be
German Yiddish, in my book. And it would end in 'g' and not with final devoicing, but perhaps it's spelled with the devoicing included.

New England
English - New England, Russian - Moscow
It's certainly folshtendige, not fal- or far-. The letter א can be either "a" or "o" if it does not have a vowel mark under it to disambiguate. What I'm trying to say is that this was not spoken or written by a yeke. The only reason it was spelled folshtendige instead of fulshtendike is because there was a believe that the German spelling vollständig was more "correct", since it was also believed that Yiddish was "corrupted German", therefore publishers, who were of course familiar with Standard German, tried to Germanize Yiddish spelling. This was very common and found in the majority of published Yiddish literature in Eastern Europe and later America, before the YIVO standard orthography became more popular.
B

duvija said:
And it would end in 'g' and not with final devoicing, but perhaps it's spelled with the devoicing included.
Click to expand...

It is a declined form, פאלשׁטענדיגע. I don't understand how final devoicing would factor in here.

berndf said:
It is a declined form, פאלשׁטענדיגע. I don't understand how final devoicing would factor in here.
Click to expand...

In my Yiddish (Poylish) , the sound is a [k] -from the base form, even if here is declined-, but it's spelled with a 'g'. I'm not sure how it's pronounced in German.
B

duvija said:
I'm not sure how it's pronounced in German.
Click to expand...